Homepage
You are here: Home1 / Mike Paradise2 / One Giant Leap for Sporty Redhot

Now that the dust has settled with the third round of Hawthorne’s ICF stake series for three-year-olds of both sexes and gaits behind us, the most noteworthy move came in the standings of the Robert F. Carey Memorial for male pacers.

Sporty Redhot, owned by Al Beals of Berwyn, Illinois, went into his Carey division in a tie for 20th place and looking like a longshot to make the $112,000 (est.) final field on the Night of Champions.

However, the Kim Roth trained pacer vaulted to fifth place in the point standings by virtue of his front-end victory with Juan Franco at his lines, and now is in a great spot to gain the Carey championship. 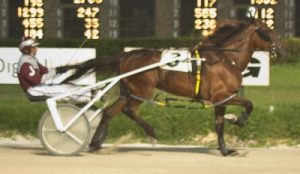 The victory was worth 50 points to Sporty Redhot who had only a single point going into last Saturday’s first $16,000 Carey division. He missed the first Carey leg and only got one point with a sixth place finish in the second.

Sporty Redhot’s Carey triumph gave Juan Franco his first winning drive in a stake race. A native of Guatemala, the 40-year-old Franco is only in his second year as a professional driver,

Saturday’s other Carey stake series winner, Fox Valley Herbie now sits atop the point standings with 102. Even with a last place finish due to two breaks in Sporty Redhot’s winning race, Fox Valley Nemitz is a very close second with 101.

Only the 10 highest point earnings advance to a championship. The fourth and final leg of the 3-year-old stake series for pacers will be contested on Saturday, September 15, a week before the Night of Champions.

In the Plum Peachy series for state-bred sophomore filly pacers both of last week’s winners, the Brett Wilfong Stable’s Boogie On Down and the Terry Leonard Stable’s Lady’s Party, made significant jumps in that series standings.

Boogie On Down and Lady’s Party were tied for the sixth spot with 37 points going in to the third round but they came out of it tied for the top position with 87 points each. The previous current leader Filly Forty dropped to third with 82 after her fourth place finish.

Fancy Creek Jolene’s second place finish was worth 25 points and she’s now at 76. Currently rounding out the top five in the Plum Peachy is Princess Sage with 63. A Real Doozie is right behind her with 58.

In seventh is Fox Valley Dandy with 50. Then it really gets tight with My Mona Me eighth at 35, Rousey Ronda ninth at 30, Dandy’s Dududidudu tenth at 29, with Fox Valley Charliz eleventh with  26.

There was little movement in the point standings of the 3-year-old Dygert trots following Sunday evening’s third leg, after the favorites Louscipher and Annas Lucky Star came out on top.

Louscipher’s triumph in the Erwin F. Dygert for colts and geldings has the Roshen Triggs trained gelding far ahead with 101 points; owners and breeders, Flacco Family Farms of Alexis, Illinois.

Trixie’s Jethro comes next with 63, while Muscles Image and Picky Picky Valor have locked up a starting berth in the final at 49 and 45 points, in that order, with only one leg to go (September 16th).

Totally Pazzazzed is in good shape in fifth place with 34, but the last five spots in the final are up for grabs. No other male trotter is in double digits. Photo Color with 6 points and Cassisandfifth with 5, are the next two highest point earners.

Lous Game N Match and Sis’s Ellie May are tied for the seventh and eighth positions with 7. Every other Beulah Dygert starter has one or two points.

Hawthorne applies for winter harness racing. Pacer has a Thirst for Success
Scroll to top