A pair of Opens are the center of attention for the first Saturday card of the summer meet with likely post time favorites looking to start the new session in the same manner they left the winter meeting, with a victory.

Kyle Husted Fox Valley Exploit shapes up to get a lot of play in the sixth race $12,300 filly and mare open after a strong campaign at the Meadowlands where she more than held her own against some very good distaffers. 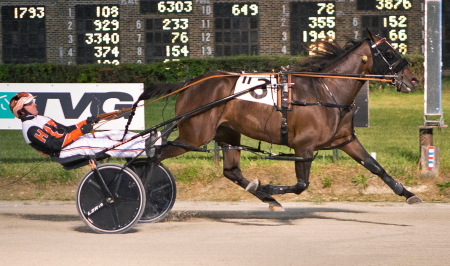 The five-year-old daughter of Sportsmaster went to the gate in New Jersey 10 times, mostly in high level conditioned paces, and never missed a check. “Exploit” banked over $33,000 in her Meadowlands campaign for owners Kyle Husted (Altamont, IL) and David Bringham (Concord, MI).

Fox Valley Exploit has been a winner in 25 of her 58 lifetime starts and three of those victories have come on the Night of Champions—The Incredible Tillie at two, the Plum Peachy at three and last year sweeping of the Tony Maurello Memorial at four.

The star of the Husted stable goes into tonight’s race with over $355,000 on her lifetime card and boasts a pair of Open triumphs at the Hawthorne winter session.

More to Come? The Gerald Hanson stable’s star Talk About Valor (Travis Seekman looks to continue his supremacy in the Open Trot ranks in Saturday’s finale. 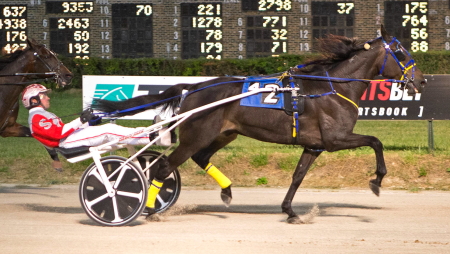 Talk About Valor looks to continue his dominance in the Open Trot ranks tonight when he goes postward in the twelfth and las race on the card. Regular driver Travis Seekman will be back at the lines of the star of the Gerald Hansen stable. (Four Footed Fotos)

The Yankee Valor gelding ended his Hawthorne winter campaign with coasting to victories in the meet’s last two Opens, first by five lengths and then by more than three lengths. After a couple of months of R&R Talk About Valor came back to crush an ICF Open field at Springfield about a week ago by three and one-half lengths in 1:54.2.

The seven-year-old ICF trotter owns a mark of 1:54.1, established at Du Quoin last summer. Not surprising Talk About Valor was assigned the outside eight-slot by the Hawthorne Race Office.

The two “outsiders” in the field are Aunt Percilla (Kyle Wilfong), from the barn of Jim Eaton, and trainer Merv Chupp’s newest trotting hopeful Rock Party who looked very good at Springfield.

The six-year-old Cantab Hall gelding breezed in both downstate starts with 1:56.3 and 1:57 clocking’s and was allocated the seven slot tonight. Disregard the 12-1 morning line odds on Rock Party. He is one of the major to Talk About Valor. Atlee Bender gets the catch drive on the Chupp Racing Stable aspirant.

Worth Remembering: Reader Rich Hoffman conveys that yesterday (July 1st) was the golden anniversary (fifty years) of Albatross setting the world record of 1:54.3 for a 5/8’s mile track at Sportsman Park. It is one of the great moments in Illinois harness racing history. Rich should know, he was fortunate to be there that night.