The filly Hart’s Heart will get her opportunity to compete in a Night of Champions series and the Mike Brink trained pacer likely will be a heavy favorite to take advantage of it in Saturday’s opening round of the Plum Peachy stake series.

Hart’s Heart wasn’t nominated to last year’s Incredible Tillie stake series. She was eligible for the two-year-old the Springfield and Director’s Award championships (both contested at Hawthorne because of the Covid-19 situation) and the homebred romped in both state-bred stakes. 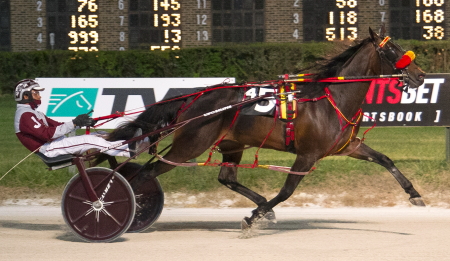 Hart’s Heart, owned by Illinois Donna Crebs (Cantrall) and Judy Conzo (Lincoln), was tucked away in her Springfield stall when Bootsy Bombay took Hawthorne’s $80,000 Night of Champions freshmen showdown and went on to capture the 2020 ICF Filly of the Year honors.

Ironically, Hart’s Heart finished ahead of Bootsy Bombay by almost five lengths in the Springfield final and by over seven lengths in the Director’s Award event but had to settle for $35,223 in first season earning’s while her rival banked substantially more ($57,653) to earn the division’s top honor.

Nevertheless, in tonight’s Plum Peachy, the first major state-bred filly stake of the year, it’s Bootsy Bombay who won’t be going to the gate. Apparently, the filly is not ready for her sophomore debut, but Hart’s Heart is, and she’ll open up as the heavy even-money public’s choice.

Hart’s Heart drew the seven-slot in a bulky 11-horse field for driver Kyle Wilfong who was at her lines a week ago when the filly from far out of it to be second best in her prep for the Plum Peachy.

Keeping Score: Despite the nine-hole with a trailer, The Gregory Kain trainee Scorecard Dandy (Juan Franco) cannot be overlooked. The Sportsmaster home-bred was second, beaten less than a length in the 2020 Incredible Tillie final and won a leg of that juvenile event eight nights prior.

Scorecard Dandy does have a sophomore start to her credit, but she wasn’t much of a factor when the filly was ducked from the 10-hole last week and finished far back.

Connie On The Go (Jamacia Patton), stuck in the second tier tonight behind her stable-mate Dandy’s Duchess (Tyler Shehan) started off her career with five consecutive triumphs including the Violet and two legs of the “Tillie) before tailing off. She did make over $45,000 in her first campaign.

Gary Rath’s Princess Moose (pp 4, Travis Seekman) secured $43, 517 as a freshman. The consistent filly was second or third in every one of her ICF stake events.

Good for Another? Also, on he Saturday program is the $12,000 filly and mare Open Pace where the four-year-old mare Maggie Rhee, trained by her driver Todd Warren) looks to hold off her third straight Hawthorne field.

Maggie Rhee has been handicapped by the Hawthorne Race Office with the outside eight post Nonetheless if she gets to the top again and has her way on the front like she did last week, another visit to the circle is likely.

The distaff Open did get tougher for “Maggie” tonight with Tempus Seelster (Travis Seekman) now in it. You might remember her from last year at Hawthorne when the Rob Rittof trained mare captured four Opens at the meet. She had six more Open triumphs at Pompano Park.

Now nine, Tempus Seelster shows no signs of slowing down. She annexed three more Open wins in Florida earlier this year, including a lifetime best 1:50.3 clocking.

Nicely Done: Despite leaving from the 10-hole, driver Kyle Wilfong carved out a winning trip for Bombay Bobby ($11.80) in last night’s opening round of the Robert F. Carey Jr Memorial stake.

The Dobbie minor trained ICF three-year-old, owned by Karta Santos of Springfield, Illinois finished a half-length ahead of the fast-closing Partyatmosasplace (Todd Warren) at the end of a 1:55.4 mile.

Ideal Big Guy took third in the first leg of the Night of Champion stake series.