Homepage
You are here: Home1 / Mike Paradise2 / Our Future Looks So Much Brighter

It’s been a long time, make that too long of a time, since Illinois horsemen and their owners will go into a harness racing season with the kind of optimism created by the passing of the governor’s huge gambling expansion bill.

Finally Illinois harness racing has a light at the end of the tunnel and it’s not just the old low-beam variety that barely enables the industry to limp along. Instead it’s a bright sunbeam that warms of hearts of hundreds and hundreds of hard working people and gives them for a chance to make a decent living.

Let’s be clear, though. It’s not going to happen overnight.

The slow erosion came about with years and years of “Recapture” moneys taking out of the Horsemen’s Purse Account and literally given to race track management while they did a piss-poor job of marketing their product despite a yearly stream of multi-millions of dollars just for opening their doors. 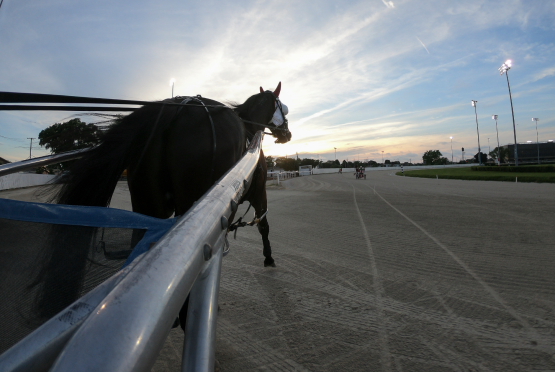 At long last there is a brighter future ahead for Illinois harness racing. (Four Footed Fotos)

When some Illinois racetracks needed more money, it almost always came out of its projected marketing budget.

Newspaper, TV, and radio advertising became virtually non-existent. The elimination of jobs at some local racetracks became the norm. It was common for a racetrack to have just one person departments.

I could go on and on but hopefully those kinds of industry damaging industry decisions are behind us. They cost us an entire generation of possible harness racing enthusiasts in our state.

Thumbs Up for New Track: We’ll start the next Illinois racing season with Recapture on its last leg, a much longer 2020 harness meeting at Hawthorne, and a soon to be constructed Standardbred racetrack before the end of next year in the south suburb of Tinley Park, Illinois.

Its developer Rick Heidner conveyed to the Illinois Racing Board his plans to build “the finest harness racing complex in the country,” complete with a state-of-the art Racino facility with an adjourning hotel and a snazzy restaurant overlooking the racetrack.

Construction of the racetrack surface, a paddock, and a temporary wagering facility will be completed by December. On Tuesday the Illinois Racing Board granted the Playing in the Park organization its request for a 12 night race meet (three nights a week) from December 6th through the 29th.

Hawthorne Race Course General Manager Tim Carey has partnered up with Heidner on the corporation to conduct future meetings at the Tinley Park facility, enabling the Chicago harness circuit to again have year around racing as early as 2021.

Demand for ICF Yearlings: Even though purses will remain stagnate for the upcoming season and the first substantial boost of purses for ICF stakes won’t take place until 2021, the selling of ICF yearlings shot upward at the recent Illini Classic Sale, in some cases far exceeding their expected purchase price.

The Illini Classic Sale was up over 20 per cent with the average sale price at $10,400, its highest figure in the last 20 years. The sales crowd was 400 plus, considerably larger than it has been in the last five years.

Unlike a year ago when the Indiana breds led the interest, the Illinois breds were in great demand as former buyers such as Erv Miller, the Delong’s, and others, returned to the Illinois market.

Seven ICF yearlings sold for over $30.000. The sale’s top seller, Lou’s Obsession, a son of Lou’s Legacy out of the Flacco Family Farm’s broodmare Lima Sunlight, went to Springfield based trainer Mike Brink for $52,000.

The past due endeavor to elevate Illinois harness racing’s prominence at long last is underway.

This will be my final column for this year. I’ll be back in early February. Until then, thanks for being a reader.