Homepage
You are here: Home1 / Mike Paradise2 / Our Loss is Ohio’s Gain

Those two words pretty much explain why tonight’s Hawthorne’s scheduled Open Pace is a “no-go” and why two-time Illinois Harness Horse of the Year He’zzz A Wise Sky was in Ohio last night.

He’zzz A Wise Sky entered Hawthorne’s Friday Open. . . the problem was no one else did.

Not a single Chicago circuit trainer wanted to take on the five-year-old pride of the Triple ZZZ Stable of Beecher, Illinois.

Who can blame them? The prodigious odds are they would be competing for second place money of a $13,700 purse.

The John Filomeno trained ICF pacer has dominated the 2022 Hawthorne Opens. The homebred is five-for-five in the circuit’s top overnight event and most of the time he’s been victorious on cruise-control.

So instead He’zzz A Wise Sky made the almost five hour drive to Lebanon, Ohio and raced for a purse of about double ($28,000) of what was offered here. The gifted pacer was also trying to make amends for his poor finish on the Ohio five-eighths oval a few weeks ago.

Illinois best pacer was parked out to a sizzling 26.3 first quarter and not surprisingly when the stretch drive came about, he was one tired horse, and faded to eighth.

He’zzz A Wise Sky left from the nine hole on February 12. Last night he shot out from the five in an eight-horse field for driver Sam Widger and took the two-hole and raced inside finishing third, beaten one and one-half lengths, while pacing in 1:50.3. 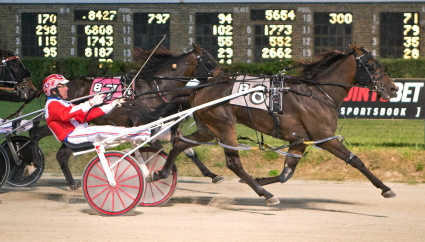 Worth the Wait: If you stick around for the eighth and last race on the Hawthorne card you can watch last season’s two-year-old colt pacing champion Fox Valley Ozzy make his sophomore debut.

The star of the Gary Rath stable is being pointed to the $30,000 ICF 3-year-old colt and gelding pace on the last Saturday of the winter meet (March 19th).

Regular driver Casey Leonard will be at the lines of the World of Rocknroll gelding who had a dazzling freshman campaign, winning 8 of 10 starts including the $138,000 Incredible Finale Final on the 2021 Night of Champions for his Marengo, Illinois owners Steve McMacKin and Dave Lee Samuleson.

“Ozzy” finished third in his qualifier last weekend, pacing in 1:58.3 in what was likely a little more than a training mile for the horse. He’ll likely compete next weekend as well.

Fox Valley Ozzy was “handed” the pole position when his race for strictly thee-year-olds didn’t fill (three entries) and he was moved to the eighth race conditioned pace with the line added AE: 3-year-old draw inside.

Lead Increases: Kyle Wilfong opened up some daylight last weekend in the Hawthorne’s driver race with a four-bagger on Sunday night.

The 30-year-old Illinois native now has a nine-win lead over defending champion Casey Leonard who is tied with Oosting. Kyle has 43 winners; Casey and Mike have 34.