The Department of Agriculture has relocated the IL county fair/Topline and IHHA races scheduled for August 10th and September 1 to the DuQuoin State Fairgrounds. Also-the IHHA trot that was rained out on July 21 will be held on Sept. 1. There were no additional days available for the IHHA pace that was rained out-therefore this purse money will be equally added into the remaining 3 IHHA pace races. 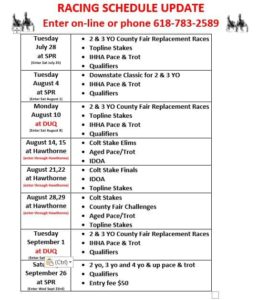 There are numerous races that would have been contested at the state fairs in Springfield and DuQuoin that will not be able to be conducted in those locations this year due to the cancellation of the fairs.  With purses available for these Illinois-bred races, it has been agreed upon that those races will be conducted at Hawthorne Race Course as part of the Night of Champions Series.  In an effort to accommodate these races, Hawthorne Race Course will host the races on nights within the already assigned racing calendar.

With the intention of allowing for these races to be conducted for our Illinois horsemen in addition to overnight races that will be offered, the following cards will have additional races:

On those nights, if the amount of races exceed what would be reasonable for a 7:10 PM post, Hawthorne Race Course will make a request of the Illinois Racing Board for an earlier post time.  Hawthorne intends to have pari-mutuel wagering available on all races offered.  All horsemen will follow the current guidelines in place for racing at Hawthorne Race Course.  Ship in assignments will be posted prior to live races.  Hawthorne will have ample stall space available for horsemen shipping in and has ordered additional number pads for races.

John Hughes: A winner in his new career

Click below to read more from Mike Paradise’ story.

Races Continue in July at Springfield

Click below for more information on the July County Fair races now being held at the Springfield State Fairgrounds.

July County Fair Races to be held in Springfield

Five (5) directors will be elected to serve terms of three (3) years each.  The following six (6) candidates filed petitions to be placed on the ballot for election to the board: David Brink, Clark Fairley, Juan Franco, Craig Grummel, Kyle Husted, Hosea Williams.

Ballots will be mailed to all IHHA members (in good standing as of June 30, 2020) on July 24, 2020 through the offices of Legacy Certified Public Accountants, which have been retained as the election supervisor in conjunction with Article III of the IHHA By-Laws.