It’s showdown time this week at Hawthorne for a half-dozen Late Closer events with two finals on tap Thursday evening, both for fillies and mares and in each case Casey Leonard will be at the lines of the morning line favorite going for a series sweep.

First up is the fifth race $15,800 Walter Paisley Series Final for fillies and mares without $30,000 in career earnings as of March 31 of this year.

Phyllis Jean has shown she warrants the pre-race Paisley favoritism when Casey and the Al Beal’s owned 4-year-old mare team-up again. The daughter of Henry Clay comes off back-to-back series triumphs in the Paisley and last week’s victory was particularly impressive. The mare had to overcome Hawthorne’s 10-hole in an 11-horse field and do it coming from behind. 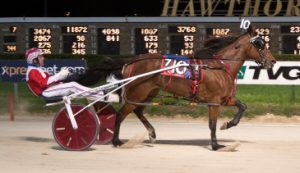 “Phyllis Jean is a nice filly, said her 39-year-old driver. I got to drive her a little bit last year and I was really impressed with her. I think she has learned a lot about racing since she was on the east coast. She’s much more manageable and handy than last year. I’m tickled to be able to drive her this year.”

“Her trainer Leon Walker has done a good job with her, continued Casey. She had a long week that first week when she returned (to Illinois). Al (owner Beals) drove to Ohio and picked her up half-way from her trip back. Leon only had her for a day and a half or something like that before she raced.”

“In her second start she got a full week off in between starts and raced much better. I was very happy with her performance.”

Phyllis Jean gets a very favorable post shift for the Paisley Final, moving inside to the three-slot tonight. Her two strongest challengers appear to be Burry Me Inthesand, driven by her owner and trainer Gary Rath, and Alabamashakey (Mike Oosting) from the Rob Rittof Stable.

Burry Me Inthesand won in 1:54.1 in her first Series leg and it was the 4-year-old mare’s first outing since last September while Alabamashakey was only a neck behind Phyllis Jean when they met in their Series opener. 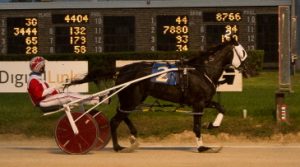 The draw for the seventh race $16,500 Dave Magee Final wasn’t kind to the pre-series favorite Lady’s Party. She won her Magee series legs in rather comfortable fashion, however her reward was landing the outside 10-hole tonight.

Nevertheless, the Mike Titus trained filly will open at 7-5 odds that she’ll make it three in a row in the series for ICF filly pacers without $10,000 in lifetime earnings as of this past March 31.

“Lady’s Party is also a nice filly and I liked her last year, too, said driver Casey Leonard. She’s going to have a good three-year-old season because she has a lot of speed.”

Look for Lady’s Party to use it in the early going to try to be ahead of some of the longshots in the field who drew in the middle of the pack.