Homepage
You are here: Home1 / Mike Paradise2 / Pictures Can Say It All

There’s an old English idiom that “A Picture Is Worth A Thousand Words.” If that’s the case then I can stop writing after this paragraph because the two posted below pretty much sum up the last two Hawthorne Late Closer Series to be decided Sunday night.

The finish likely will be close . . . probably very close.

While both the $12,100 Peter Galassi and the $12,600 Phil Georgeff Finals have only five horses going postward the competitiveness of the last two series legs contested make up for the smallish size fields. 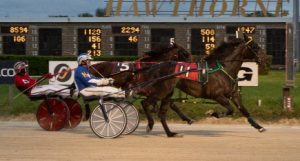 The even-money Peter Galassi morning line favorite Lakeside MS Queen was a romping seventh length winner in her first leg when tonight’s 3-2 second Dali Delight program choice didn’t compete but last week when they met, only a half-length separated them at the finish wire.

Lakeside MS Queen (Dale Hiteman), trained by Jace Sundeen, made a break before the start but came back for her 1 to 5 supporters. On the other hand Dali Delight (Kyle Wilfong) set soft fractions of 29.4, 58.4 and 128.1, when she got overtaken in the late going.

Would a faster pace produce a different result? Maybe so, but maybe not. Keep in mind that Dali Delight did miss three weeks before last Sunday’s start. Will only a week off this time around make a difference?

Seeking to pull off a bit of a surprise in the Peter Galassi are IYQ BNU (Trenton Watson), Patches Girl (Larry Plank) and Rear View (Mike Oosting). 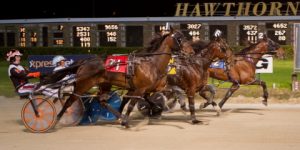 The first three finishers were only a half-length apart in the first leg of the Phil Georgeff,  No. 2 Heartland Revenue first, No. 6 Gettin Rowdy second and No. 6 Mr. McDreamy third. (Four Footed Photo)

Only one leg of the Phil Georgeff Series was raced but that one was a doozie. The first three finishers—Heartland Revenue (Mike Oosting), Gettin Rowdy (Keith Crawford) and Mr. McDreamy (Kyle Husted) were separated by only a half-length and the end of the 1:55.2 mile.

The fourth finisher Skyway Fireball was beaten 3 and 3 /4 lengths but note that it was the 3-year-old gelding’s very first pari-mutuel outing.

Look At Luke Smile went off stride before the start with one of his owners at the lines and was a non-threatening fifth however the pacer bounced back with tonight’s driver Kyle Wilfong and breezed in a race last week in 1:57 flat for trainer Angie Coleman.

The Tom Simmons trainee Heartland Revenue (7-5 in the morning line) has the outside five-post tonight with the 8-5 second choice in the program Mr. McDreamy from the Herman Wheeler Stable on his left.

Keith Crawford’s Gettin Rowdy (3-1) , who showed good gate speed in leg one of the series, is sitting pretty with the two-post. Look At Luke Smile (15-1) has the rail and the Dave Brook Stable’s Skyway Fireball (Jim Lackey) leaves from the three hole in the third race series showdown. 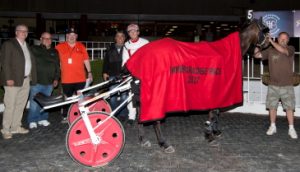 In Your Eye, driven by Ridge Warren, worn the winning blanket of the Mike Paradise Series. He was joined in the winner’s circle by the races honoree sporting his “Illini Orange” shirt and to his right was IHHA Director Joe Cassano.

The Eyes Have It: The Mike Brown Stable’s In Your Eye ($5.40) came rolling down the middle of the stretch and went on to capture last night’s $15,400 Mike Paradise Series Final.

Patiently driven by Ridge Warren, the 3-year-old Sportsmaster gelding raced fourth through most of the 1:54.2 mile. After Commondiscourtesy, Sullivan and Ima Skydancer battled through a 27.2 third quarter, Warren pulled the winning James Behrendt horse out for the stretch drive and In Your Eye rushed past in time.

Ima Skydancer finished second, one and one-half lengths behind, while Sullivan was third in Hawthorne’s fifth race.

Trained by Nelson Willis, the 4-year-old gelding took command soon after the first quarter pole (28.2) and after consecutive modest middle panels of 28.3, Hot Rod Dylan ($2.80) had more than enough left (26.4) to end up one and one-half lengths ahead of runner-up 40-1 longshot Bowedfortyova. Sporty Redhot grabbed the third place money.

The third race $11,000 Open II Pace for fillies and mares saw the Chupp Racing Stable’s Kyles Secret ($19.60) make it 3-for-3 at the Hawthorne meet. Nicely rated by driver Tyler Shehan, Kyles Secret, the front-steeping 6-year-old mare edged the 4-5 favorite Seeyouatthefinish by a neck in the 1:53.4 mile