A bevy of ICF Standardbreds will invade Hoosier Park tonight with the hopes of boosting their purse earnings in open company stake races.

A half-dozen 3-year-olds, headed by a trio of Hawthorne’s Night of Champion winners, will go postward in divisions of the Circle City stakes while the 2-year-old Maximus races in a $66,400 division of the Madison for juvenile pacing colts and geldings. The Ken Rucker trainee is making his first start since he was nosed-out on the Night of Champions by Meyer On Ice in the $136,142 Incredible Finale final.

All three Night of Champion victors drew very well in their respective events. 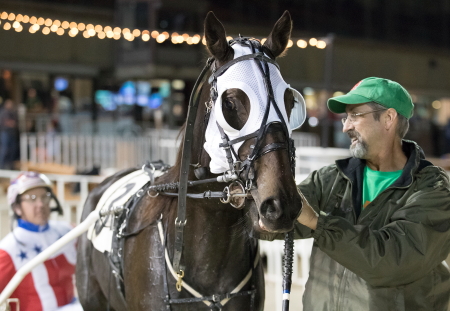 Fox Valley Gemini will bring a flashy season record of 10 wins in 12 outings. Currently under the care of trainer Ross Leonard, the son of Yankee Skyscraper has $295,000 in earnings in his first two campaigns of racing for owner Jim Ballinger of Atwater, Illinois.

The New Americana also drew the rail in the fourth race first Circle City division for pacing colts and geldings and will be driven tonight by Brandon Bates. The Plum Peachy champion had some bad racing luck a week ago when she finished sixth in a division of a Pegasus stake. The Misael Garcia trained filly was third on the inside much of the way but got shuffled back in the lane and found racing much too late, beaten three lengths.

Beulah Dygert titleholder Trotting Grace saw her five race winning streak snapped last Friday when she was third in her Pegasus stake division. The Steve Searle trotting filly cut a fast pace of 27.4 and 56.3 to the half before she tired in the last 20 yards or so.

Trotting Grace (Trace Tetrick) shot out of the gate and got an easy lead but the layoff and the fast sub 28 first panel proved to be detrimental. Nevertheless trainer Steve Searle, who shares ownership of Trotting Grace with Mystical Marker Farms (Valparaiso, Indiana) and Bill Wright of Morton, Illinois, was pleased with his filly’s performance.

“She raced well,” said Steve. “It was her first start since the Night of Champions, four weeks earlier so even though she was sharp, she wasn’t razor sharp. 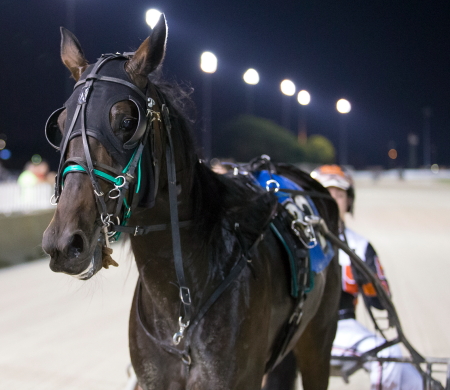 “Trotting Grace is a dream come true,” said Searle about his filly who hasn’t missed a purse check all year while winning 7 of 16 starts and banking almost $105,000 in her second season. She is a handy horse to drive. She likes her work and is a joy to be around.”

Trace Tetrick will be back at Trotting Grace’s lines when she leaves from post three in the 12th race third Circle City filly trot division.

Allbeastnobeauty, winner of the Springfield final for 3-year-old ICF pacing fillies and the Time Dancer at Du Quoin, debuts for new connections when she leaves from the outside eight slot in the fifth race second $37,250 Circle City filly pace. She was acquired by trainer Virgil Morgan nine days ago and will be driven tonight by Corey Callahan.

Springfield champion Illinimight will have regular driver Casey Leonard in the bike for the ninth race second $48,500 split for trotting colts and geldings. The Cassis trotter with $53,976 on his 2018 card will race out of the barn of trainer Shane Bowermaster tonight.

The Tom Simmons stable’s Backstreet Lawyer (Mike Oosting) has his work cut out with the seven-post in the eleventh race nine-horse second division of the sophomore male pace. The Sagebrush gelding has been the victim of some unfortunate trips in both of his Indiana starts.

Three weeks ago Backstreet Lawyer left for early position only to be parked out throughout and not surprisingly faded in the lane. Last week the horse was taken back at the start and was eighth, more than a dozen lengths behind at the half. The pacer did make up almost nine lengths on the field but still ended up eighth, beaten three lengths,

Looking Back with Jerry Graham Legislative Update
Scroll to top