When the Walter Paisley Late Closer Series got under way two weeks ago, Princess Oshie came into it as an “under the radar” mare.

Unraced as a freshman and with only modest success as a 3-year-old, the Richard S. Finn trained mare didn’t get a lot of attention going off at 20-1 odds in her initial series leg. The Always A Virgin mare had only two victories in 28 starts in 2017 and banked a little over $11,000.

Nevertheless, Princess Oshie did race well during the winter, winning a Late Closer series leg and picking up a check in every start for her owners, Walk On Water Stable of Beecher, Illinois. The mare went to Hoosier Park after her layoff and collected two more purse checks. 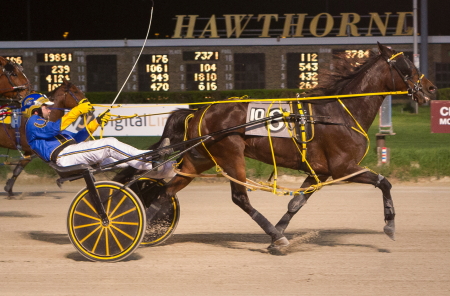 In her first Paisley start Princes Oshie, closed a ton and dropped a photo to Fox Valley Catwalk. Last week she came from even further back (10 lengths in the lane), to pop at 14-1 odds, with a strong last quarter burst in her career fastest 1:54.4 mile.

“She’s much more mature now than she was as a 3-year-old,” explained her driver and trainer Richard S. Finn. “She was a small immature 2-year-old, so we took her time with her. She’s still a small filly but she’s maturing and has really come around. Now she has the desire to be a racehorse. She really likes to fight it out with other horses down the stretch. I couldn’t be happier with her. She’s had big efforts in both of her series starts. We were in a bad spot last week behind poor cover but she kept digging in.”

Princess Oshie has already made about $3,000 more this year than in her 3-year-old campaign and she could make a substantial deposit to her purse account in the’s $12,200 Paisley final, one of four Late Closer championships on the line Friday. 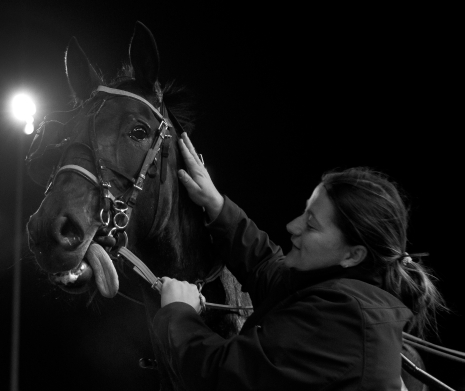 Princess Oshie got some well-deserved affection from Rikki Finn before being led into the Hawthorne’s winner’s circle following her Paisley series leg victory. (Four Footed Fotos)

Tonight she gets a rare start from the inside, when she leaves from post two in a 10-horse field. Fox Valley Catwalk (Tim Curtin), has the six slot, while November Rain (Casey Leonard), had the bad luck to draw the 10-hole.

Three other Late Closer finals are on the second card, with the six-horse field $12,200 Bea Farber  going as the second race. Second and first leg winners Totally Pazzazzed (Tim Curtin) and Lous Silver Star (Tyler Sheehan), have the one and two slots, while the three through six, will be manned by Dr Spengler (Curt Grummel), True Detective (Casey Leonard), White Pants Fever (Steve Searle) and Southern Appeal (Juan Franco).

Also, looking for a series sweep, is the Roshun Trigg Stable’s Ryans Mistress (Juan Franco), in the seventh race Dave Magee championship. The 3-year-old filly secured the outside seven-slot, but she’s come from seventh place in both of her series wins and will be at 9-5 first flash odds.