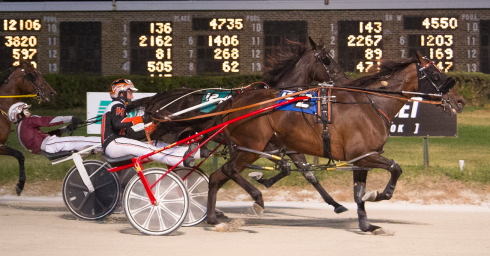 Illinois bred three-year-old pacers and trotters will be the focus of attention Saturday night when they tangle for the last time prior to next week’s Night of Champions, Hawthorne’s yearly showcase evening of their harness racing meeting.

Most of the starting berths in the ICF sophomore championships have been locked up but there are still a few spots still to be decided so a high placing in tonight’s final series legs with $15,000 pots could go a long way to advancing to a final.

With 11 entries in the final round of the Beulah Dygert Memorial trotting series, another split was necessary. Thus far the Steve Searle stable’s Lous Abigail has been dominating the division, winning her four last starts, including both recent State Fair championships raced at Hawthorne. She’s at 2 to 5 in my line.

A single $15,000 series leg division of the Robert F. Carey Jr. Memorial will take place as the twelfth and final race on the card with last year’s freshman male champion He’zzz A Wise Sky (Bobby Smolin) figuring to get a huge chunk of the public’s wagering money.

The Don Filemeno owned and bred colt ended July with a victory in a Carey series leg and finished off August with both State Fair titles added to his résumé.

The victory by the Jim Eaton trained freshman put driver Todd Warren just three away from career win No. 5,000.

Todd also drove Allbeastnobeauty to her triumph in Friday’s opener, the Tony Maurello Memorial elimination of aged state-bred pacing mares. Failing to advance to that final were the ninth and tenth place finishers, Boogie On Down and Fancy Creek Jolene. 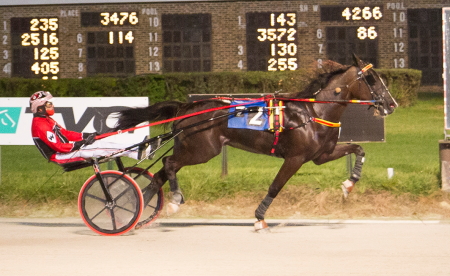 Loulita Keeps Cruising: The Flacco Family Farms home-bred Loulita ($2.60) continued her dominance of the Fox Valley Flan division for first season trotting fillies with her fifth consecutive victory, drawing off in a season best time of 2:01 flat for driver Casey Leonard and trainer Steve Searle and her Alexia, Illinois owners.

Chalks Prevail: The final series legs of the Kadabra trots were raced in two divisions with the first going to the fast improving 3-5 favorite Lousrolando, driven by his trainer Kyle Husted in 2:01.1, more than a half dozen lengths ahead of the runner-up I’mnotalocaldude.

In the second Kadabra split it was Fistfullofdollars ($2.60), driven by Kyle Wilfong, getting his maiden victory in front-end fashion. The Mike Brink trainee trotted the mile in 2:02.1.

He’s Back: Al’s Hammered $4.40), trained and driven by Bobby Smolin, continued his comeback at the age of 11, by winning the Robert S. Molero Memorial elimination in 1:52.2. Eliminated from the championship were Mykonos and Master Sage.

A Dandy Win: The Incredible Tillie stake series took another turn when the 2-1 second choice Scorecard Dandy (Juan Franco) nailed down her first leg win for trainer Gregory Kain with a 1:55. 3 mile. Princess Moose and Bootsy Bombay were second and third best, in that order.

A Star Falls: In the 12th race Friday finale Annas Lucky Star was upset in the Plesac prep by Louzotic (Kyle Husted). The two ICF mares fought down the lane with the Steve Searle trained Louzotic ($15.60) coming out on top by a head for Flacco Family Farms of Alexis, Illinois.