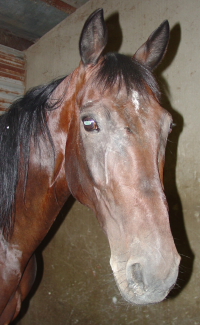 The most dominant horse at one racetrack over a period of time in my many years of covering Illinois harness racing has to be Taser Gun at Maywood Park.

The son of Henry Letsgo put up some amazing numbers at the one-time but now torn down facility during the 11 years this author was the track’s Director of Publicity. The word “amazing” in that sentence isn’t overstating the facts

Taser Gun went to the gate 46 times at Maywood Park in his illustrious career that cover nine years (1997 through 2005) and stopped at the track’s winner’s circle 29 times. That’s an extraordinary 63 per cent winning average.

As a 3, 4 and 5-year-old the pride of Medora, Illinois finished first a mind-blogging 75 per cent of the time at Maywood, going 21-for-28 through that stretch, and all but one of those wins came in an ICF stake, a Free For All or an Open Handicap usually with Taser Gun assigned the outside post.

Not too shabby a record for a $3,300 purchase as a yearling.

Taser Gun had his own “Traveling Fan Club.” Sometimes it seemed to me at times that half of the village of Medora (population 419) made the four-plus hour drive to Maywood Park to see their “hero” compete. They rarely made the long late night trip back home disappointed.

All told, Taser Gun’s lifetime record was a gaudy 69-for-147, an impressive 47 per cent winning clip for trainer Robert Walker and his Medora, Illinois owners, Cunningham Racing. Their remarkable ICF pacer had a lifetime mark of 1:49.2, taken at Balmoral in 2000 at the age of five. 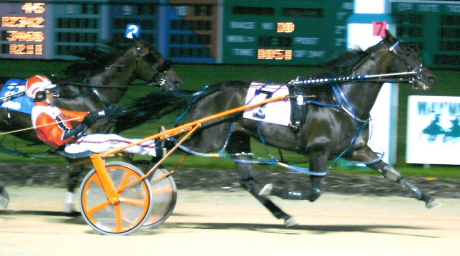 Taser Gun with his regular driver Andy Miller is shown here winning the 2004 Associates Stake at Maywood Park as a nine-year-old. (R E B Photo)

Taser Gun also competed in a number of American Nationals at Balmoral against many of the nation’s very best aged pacers. He also finished fourth at the Meadowlands in the1999 Breeders Crown Championship, and was second in Maywood Park’s 1998 Windy Pace Final to Take Down The Flag.

Taser Gun was an Illinois “millionaire”, earning $1,158,893 before being retired after his 2005 season when he competed as a 10-year-old. It’s not often you see a Standardbred make over $1 million and capture just one six-figure race. Taser Gun’s biggest first place prize ($50,000) came in Balmoral’s $100,000 Dan Patch on Super Night 2004 when he was a nine-year-old, an age when many pacers have slowed down or are no longer racing..

Interestingly, while Taser Gun was heralded for his exceptional gate speed enabling him to win dozens of races on the front-end, his only Super Night title came in come-from-behind fashion with his regular driver Andy Miller.

Andy ducked Taser Gun on that 2004 September evening, as the favorite Constant Change and Sports Fancy battled to a 55.2 half with Taser Gun ninth in a 10-horse field, some six and one-half lengths behind. He was still eighth, trailing by four lengths at the three-quarters (1:23) before exploding in the lane with a 26.2 last panel and prevailing in 1:50.2.

Taser Gun was still racing in Chicago circuit December Free For All events at the end of his racing career. His last victory was in a 2005 Invite at Indiana Downs, and he did it with a swift 1:50.1 clocking.

Taser Gun spent his retirement years enjoying the great outdoors and making frequent appearances with his long-time trainer Robert Walker and family, along with driver Rick Schrock, to the Springfield State Fairs and Chicago circuit Super Nights. He also was the star-attractions at numerous Illinois County Fair tracks, much to the delight of his many admirers.

Sadly my all-time favorite ICF pacer passed away at the age of 23 in May of 2018 at his home at the American Standardbred Adoption Program in De Soto, Wisconsin.

I know I speak for many of us in the industry when I say: “Thanks for all those great memories “Taser.”

Videos and pictures of Maywood Park’s demolition are available at:
https://www.bing.com/videos/search?q=maywood+park+racetrack+demolition