Homepage
You are here: Home1 / Mike Paradise2 / Rock It Out Courageous and Determined Mare

Donna Holt’s Rock It Out, the pre-race favorite in tonight’s $12,300 featured Open Pace and fillies and mares, has shown plenty of tenacity on the race track this year, pacing a sub- 1:50 mile and winning a trio of Opens here and in Kentucky.

However, what stands out about this five-year-old mare is her courage and fortitude to not only a survive a western Kentucky tornado that left her under trapped under rubble in a barn last December but the fact that she has gone out to continue a superb racing career for her trainer and owner Donna Holt. 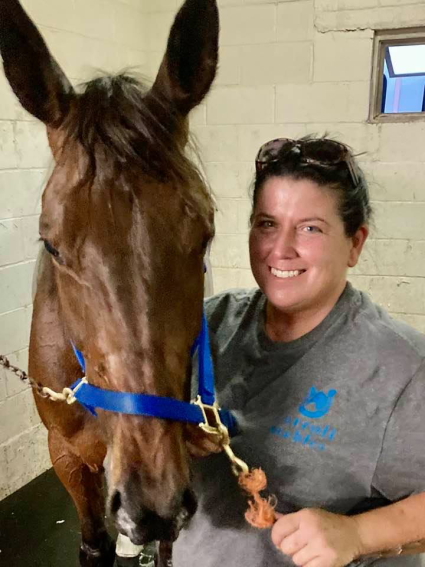 Rock It Out with her trainer and owner Donna Holt. (Photo courtesy of Donna Holt)

The Rockin Image mare has made only nine starts this year and the first didn’t come until late May. She needed those first four months of the year to heal, physically and mentality, to recover and return to be the good pacing mare that she is for her Benton, Kentucky owner.

“I wanted to give her all the time she needed. I wasn’t going to rush her back,” said Donna. After all that she’s been through, she’s done really well,” says Donna. “I had doubts that if she came back, she wouldn’t be old self, but she’s proven she has the grit and determination to come back with a vengeance. She wouldn’t let that storm beat her.

“She’s just a tremendous horse. When she races, she gives you her all. After a race she knows she has given her best out there.

Since being buried under the tornado’s rubble, Rock It Out has three wins and a trio of thirds, banking almost $36,000 for her Kentucky conditioner. In 70 lifetime starts she’s won 22 times and earned nearly $185,000.

The front end is Rock It Out’s “up of tea.” The mare can rattle off some fast fractions and will likely have to be collared when she sprints out from her assigned outside seven-post.

“She can race from behind, but she likes to be in front. Once there she doesn’t want to give it up,” added Donna. 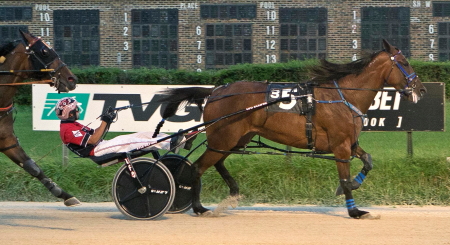 Being an Indiana bred, Rock It Out has mostly been raced in the Hoosier state but she has made 19 career starts at Hawthorne and has come out on top in nine of the outings, a substantial winning percentage.

Rock It Out was one of six horses to survive the devastating tornado that destroyed Donna’s house and barn and her father’s house and workshop in an adjoining property.

One of Rock It Out’s six opponents tonight is her stable-mate Love Is Hill (pp 3, TBA), who is also having a fine year for Donna. The four-year-old mare is a six-time season winner including a Hawthorne Open earlier in the season. She’s put $36,596 on her card for Donna this season.

Dark Sunday:  There’s no live racing Sunday evening at Hawthorne. There will be a double-draw Tuesday morning at Hawthorne. for both of Du Quoin’s Friday night (Aug. 26) and Saturday afternoon (Aug. 27) programs