Homepage
You are here: Home1 / Mike Paradise2 / Rolling in the Dough

The Robert F. Carey Memorial stake series got under way Saturday night and its ICF 3-year-old colt division went pretty much as expected.  However the $12,500 second split didn’t . . . at least for most players. 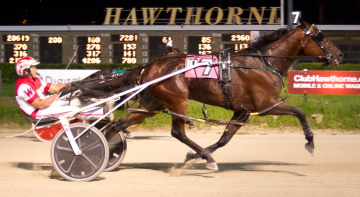 Jesse and Austin De Long’s Holdonwe’rerolling came from far out of it for driver Todd Warren and overtook the favorite Royale Rose in deep stretch at 53-1 odds, and paid $108.00.

The Clinton, Wisconsin owners, trainer Bob Rittof and Warren weren’t the only ones with smiles on their face after the 1:54.1 victory. I had to admit I had a grin on mind as well.

Holdonwe’rolling was a “Mike’s Price Shot” selection in my line. His victory wasn’t a huge surprise but his price certainly was. The pacer had a 1:54.4 win at Hoosier in early May and looked very good taking his Hawthorne debut a week ago in 1:554.4.

The horse’s breeding was also selling point for me. He’s by Party At Artsplace out of the Big Towner mare Maura Hanover. That makes him a full brother to 2011 Super Night champion Party Hangover (1:51.1, $371,608) who was trained by his co-owner Jesse De Long.

Party Hangover is currently racing out east for the Ken Rucker Stable and boasts 35 career wins.

Warren ducked Holdon’werolling at the start of Saturday’s sixth race while the 2 to 5 favorite Royale Rose took over the lead on the backside. After a modest 57.4 half things didn’t look good for Warren and Holdonwe’reolling who was in eighth, eight-plus lengths off the pacesetter and behind three other horses in the outer flow.

Warren got Holdonwe’rerolling out and rolling in the final turn, taking the gelding five deep and once the Rittoff trainee straighten out for the stretch drive he suddenly became a factor. The horse was still almost nine lengths behind at the three-quarters (1:26.3) but was flying. He paced the last quarter in a very quick 26 flat for his longshot backers.

When the pre-race favorite Dan D Dune, last year’s Orange and Blue Colt champion, was scratched a second week due to sickness in the first Carey division, the red-hot Caffeine Kid was hammered down to 4-5 odds and ended up a comfortable front-end winner, his fourth straight at Hawthorne, this one in 1:55.2.

Trained by Rodney Freese for Sherman, Illinois owner Peter Karras, Caffeine was also driven by Todd Warren who had four winners on the card.