Homepage
You are here: Home1 / Mike Paradise2 / Roth Eager for a Summer at Hawthorne

“I’m thrilled that Hawthorne is opening,” said the Oak Lawn, Illinois native. “Their winter meet was good to me and I’m hoping we’ll do well at the summer meet, too. I’m really looking forward to it.”

Hawthorne’s four nights a week summer meeting that stretches from tomorrow’s opening night start through the end of September gets under way with a 12-race card Friday evening with a bevy of events for fillies and mares.

Roth has spent much of the past three months getting ready and eagerly awaiting the summer session after her fruitful January at the in-town facility.

Kim horses visited the Hawthorne winner’s circle nine times at the 5 and 1/2 week winter meet, only three less than the meet’s leading trainer Jim Ellison. Leading the way for Kim was the 3-year-old ICF filly pacer Whiskersonkittens, victorious in her last three starts at Hawthorne. 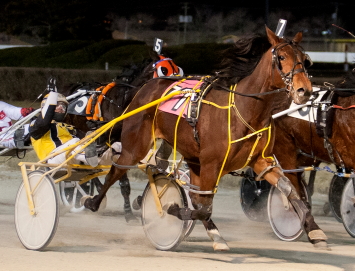 Whiskeronkiittens wasn’t staked as a 2-year-old but she’ll get her chance this summer against the best in her division. She’s eligible to Hawthorne’s Plum Peachy stake series after putting over $18,000 on her card earlier this year for her owner and breeder Ron Knupp of Anna, Illinois.

A daughter of Party At Artsplace, Whiskersonkittens is the second foal out of Knupp’s broodmare Out Of The West. Little Hank (1:53.4) was her first

“My owner (Ron Knupp) is a real good guy and pretty much lets me do what I want with his horses. He decided to make both Whiskersonkittens and Party Falls eligible for these 3-year-old Illinois bred Series at Hawthorne.”

Can we expect to see Whiskersonkittens at the beginning of the summer meet?

“It’ll be a few weeks before ‘Whiskers’ is ready to race,” replied Kim. “I got her down to around “20” right now. Both horses kind of got a late start. Ron had them at his place in Anna and they had some bad weather there.

“Party Falls will probably miss his (Hawthorne) Series. He’s further behind than ‘Whiskers’ He’s down to ‘25’.

There’s excitement in Kim’s voice when she talks about “Whiskers.”

“The filly is a beast. She loves to compete and just loves her job. She raced very well at Hawthorne in January and had a very good 2-year-old season. She wasn’t eligible for any of the ICF stakes. It’s just too expensive to stake a horse in this state especially when you don’t what what’s happening with the Illinois bred stakes setup right now.

“Not too many owners want to take the risk (a $1,750 nomination fee) when they don’t what their horse will race for. We still don’t know yet about the purses for the Cardinal or Violet or what’s going on this summer at in Springfield.”

Roth has also had past success at Hawthorne when the Stickney, Illinois facility was hosting harness racing in 2006, 2007 and 2008.

Kim had a number of good horses in her barn back then like Prime Xample A, Jo Pa’s Bench Mark, Officer Joe, Saint Nicklaus, Distant Color, Wesley Snip and Apache Jake. 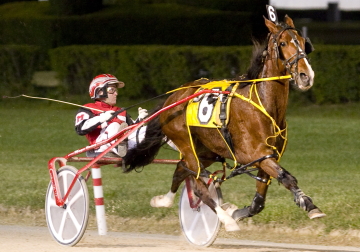 “Prime Xample brings back some fond memories at Hawthorne,” said Kim. “I still have picture on my wall of her winning there with Dave Magee. (See posted Four Footed Photo)

Prime Xample came to the United States at the age of five in the spring of 2007 and made over $71,000 that season. She competed into her 8-year-old season in 2010 and is now a broodmare for her Chicago owners Rock And Roll Stables, Inc.,

“That mare has an outstanding colt racing out east,” said Kim. “His name is Americanprimetime and he’s a monster. He won a couple of weeks ago in 51 on a half (Yonkers).”