By Mike Paradise
Illinois trainer Steve Searle has been around for all of the circuit’s Super Nights of racing, going back to the first one in 1989 at Sportsman’s Park. And like many of the small stable horsemen in our state he’s watched others bask in the glory of winning of the “big ones.”
That was until last Saturday when Searle’s veteran mare Ants Iner Pants captured the $50,000 Plesac Final on Hawthorne’s Night of Champions, its version of Super Night, with a gutsy performance with Kyle Husted at her lines.
I didn’t remember one of Searle’s horses ever winning a Super Night championship so I asked Steve the obvious question and got this reply:
“Not even close,” said the 59-year-old Searle.
Ants Iner Pants changed that and the seven-year-old mare did it beating not just other ICF trotting mares but older male trotters as well. And she did it taking a lot of air. The mare raced without cover from the first quarter pole on.
Ants Iner Pants, bred and owned by Searle and Tom Wisniewski of Howell, Michigan, has been the darling of Steve’s stable since her two-year-old campaign back in 2011. She’s never earned less than $33,000 in a season of racing for Searle and came into 2016 with 26 career victories.
However this season the high-strung mare struggled to visit a winner’s circle. She went winless in her first 13 starts but as they say, “got good at the right time.”
She was second at Springfield in the Aged Mare stake for older ICF trotters and then won the same event at Du Quoin a week later. 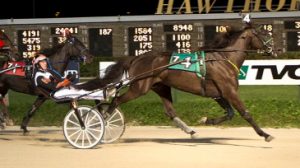 Five days later Ants Iner Pants dropped a close neck decision to Little Ms. Chrissy in the Plesac elimination and with three very good efforts in a row the betting public last Saturday sent her off as a 5-2 co-favorite with Rock Hollywood in the championship.
She didn’t disappoint those backers.
What turned the antsy veteran mare’s season around?
“We made some changes as far as her training was concerned”, said the Grant Park, Illinois resident. “She’s very aggressive when I drive her. She’s a handful. We stable at Gerry Hanson’s Farm up here (in Beecher, IL) and since we’re at a farm and not at a racetrack I can jog one of my horses and put Ants Iner Pants on a lead-shank and let her jog alongside.
“She now gets twice as much exercise as before and I can go a lot longer with her. Also, this way she’s not a knucklehead. She’s not so hard on herself. That’s the reason for her turnaround.
“She also gets turned-out twice a day which has been fantastic for her.
“Last week I decided to try her with her boots on but not her harness. I had to jog some of my other horses on the Night of Champions card so I jogged Ants Iner Pants two miles that way, then I turned her and went a training mile with her going alongside me. She got her first mile in and she wasn’t pulling and acting up badly like she usually does.
“Then I took her back in and put her harness on, her bridle back on and all of her other equipment and took her back out and she trained fantastic. She was much more relaxed and as you saw she raced that way the other night when won the Plesac.”
Ants Iner Pants makes her next start in Friday night’s eighth race looking for her 29th career victory.
http://harnessillinois.com/wp-content/uploads/2021/03/ihha_logo_white_wtext_v2-300x130.png 0 0 Mike Paradise http://harnessillinois.com/wp-content/uploads/2021/03/ihha_logo_white_wtext_v2-300x130.png Mike Paradise2016-09-15 12:43:512016-09-15 12:45:25Searle’s Antsy Mare Delivers the Goods