Senior Favorites Fizzle on U. of I. Day

You are here: Home1 / Senior Favorites Fizzle on U. of I. Day

It was the University of Illinois Day at the 2022 State Fair while on the racetrack the focus was on the “Senior Citizens” of the state-bred Standardbred colony.

Four Illinois State Fair Colt Stakes for older horses were contested and the heavy post-time favorites didn’t have it their way in three of the four $7,000 championships.

Just Too Good: The first of the four ISFCS aged stakes was for pacing horses and geldings went as expected as the Terry Leonard stable’s Fox Valley Gemini, driven by Casey Leonard, was much the best for his Atwater, Illinois owner Jim Ballinger.

The victory was the seven-year-old state bred pacer’s 51st of his brilliant career in an even one hundred trips to the starting gate for the Yankee Skyscraper gelding and it gave Fox Valley Gemini back-to-back Illinois State Fair aged stake triumphs. 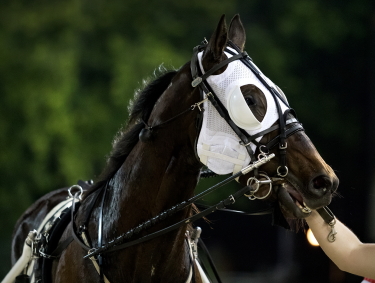 Casey took the prohibitive favorite out from the get-go and into a quick lead. After a brisk 27.3 first quarter. Fox Valley Gemini ($2.10) went to a leisurely 29 second panel and another soft third quarter (1:26.1) before pulling away from the overmatched field. Holden Steady was second best.

A Sweet Victory: The $7,000 ISFCS trot championship for older males figured to be a much more competitive event and it certainly was as the 9-2 second choice Heath Bar, nicely handled by his trainer Jamaica Patton, powered his way to a winning 1:52.4 mile, the fastest time so far this year for an ICF trotter and just three-fifths of a second off Mack Lobell’s Illinois State Fairgrounds rack record.

The 1-5 heavy favorite Talk About Valor (Travis Seekman) sprinted out of the gate and took the five-horse field to a fast 55:4 half with Heath Bar in fifth place. Jamaica got Heath Bar ($11.20) on the move on the backside and drew even in the last turn before he left Talk About Valor in the dust.

The 12-1 longshot Louscardamon (Kyle Husted) finished second, about three lengths behind the winner.

Chalk It Up: “Chalk” players had frowns are the faces again in the older filly and mare pacing showdown when Skeeter Machine ($12.60) blew by the overwhelming 2-5 public’s choice in the stretch on her way to a lifetime best 1:50.4 clocking under the capable handling of driver Casey Leonard.

The time was the fastest for any Illinois bred pacing filly or mare this year.

Fox Valley Exploit (Kyle Husted) came flying out at the start and no doubt raised some eyebrows when she paced a blistering 25.4 first quarter with Skeeter Machine in the pocket. “Exploit” didn’t slow down much the next quarter, hitting the half-mile marker in a quick 53.1 however, by the three-quarter pole (1:22) it was obvious she was running out of gas as the Nick Prather trained Skeeter Machine rushed on by for Peoria, Illinois owner James Greer.

Fox Valley Exploit held on for the bridesmaid role while My Uptowne Girl took third.

The Queen Defeated: The biggest shocker of the afternoon when Carroll and Diane Hays’ Reign And Shine upset the Trotting Queen of Illinois Annas Lucky Star in the mare trotting division aged four and up with Jamaica Patton at his lines.

The winner got a big “assist” in the race when No. 1 High Queen Anne (Jared Finn) parked out the 1 to 9 Annas Lucky Star to a bruising 26.2 first quarter.

Annas Lucky Star (Kyle Wilfong) got away with easy middle quarters (30.2 and 29.3) but that rapid opening panel took its toll in the lane on the overwhelming favorite and Reign And Shine came from the back of the pack and zoomed by to win in 1:54.1 by a half-length for her Alexis, Illinois proprietors. The five-year-old Cassis mare knocked more than two seconds off her previous fastest mile.

Prep Stars: A pair of three-year-old prep paces for next week’s ISFCS championships were also on the Saturday card.

The pocket horse Pattycake Moose was the runner-up to the Major Bombay home-bred with first over Stardust Gram a game third.

Getting It Done The much-anticipated duel in the colt and gelding division between the top two rated youngsters Get E Up (Kyle Husted) and Fox Valley Ozzie (Casey Leonard) was as good as advertised.

Get E Up ($3.80) did get up in time to win by three-quarters of a length over his rival, racing first up from the backside while Fox Valley Ozzy cut quick first half fractions of 26.2 and 28.4).