Its leg two of the Incredible Finale stakes series for 2-year-old ICF pacing colts and geldings tonight and when the two $17,500 Night of Champions divisions are in the history books, we will get a better idea which youngsters are this year’s contenders rather than pretenders.

Going into round two, RJ Wulfy (Ryan Anderson), from the barn of trainer Ronnie Roberts, and the Terry Leonard Stable’s Canadian Mountie (Casey Leonard), are standing tall in their first season.

However, we’ll have to wait for another night (or day if it’s at Springfield), to see these two rising stars tangle for the first time. For a third consecutive occasion RJ Wulfy and Canadian Mountie again drew into different divisions.

RJ Wulfy is the 6-5 morning line favorite, in the third race first Incredible Finale, while Canadian Mountie will be a 6-5 first flash odds one event later.

As we pointed out in an earlier story, RJ Wulfy is a full brother to Ronnie’s former ICF champion pacer Prize Art (1:50.2), who was particularly a terror on Hawthorne’s big track back in 2008. 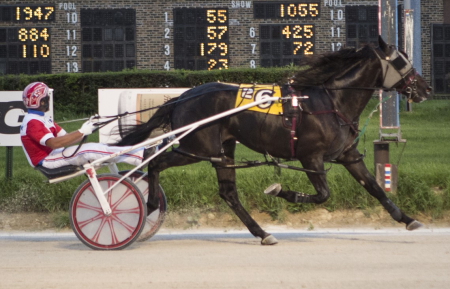 A week later Ryan Anderson took over the freshman’s lines in a division of the Cardinal and the winning margin was down to 2 and 1 /2 lengths however, the mile time was 1:55.2, one and three-fifths faster than on June 14th and the youngster went from seventh to first in the second quarter of that race.

Ryans Ambassador (James Molitor), second best to RJ Wulfy in their Cardinal, is back for another crack at his division foe and so is Fox Valley Wren, a strong first-over winner a week ago preparing for tonight’s contest.

Fox Valley Wren, listed as the 3-2 second programmed choice, was a non-threating fourth in the first Incredible Finale go-around but it was the youngster’s very first start and he did finish his last panel in 27 seconds flat.

Illini Force (Ridge Warren), a winner in his initial division of the Incredible Finale, has the outside six slot in his first start on the medication lasix, while Sassy Lil Thing (Cordarius Stewart), has the pole position and longshot L L Gram (Juan Franco), starts from the five-post.

Canadian Mountie, owned by Jim Ballinger of Atwater, Illinois, cruised to a one and one-half length triumph in his Cardinal split on June 29th and starts from the three slot tonight, inside of his main rivals—RG’s Tracer (Travis Seekman), Hello Rooster (Kyle Wilfong) and Chick Magnet (Kyle Husted).

Longshots Kbtwo (Juan Franco) and Patton Plus (Jamaica Patton), have the two inside slots.

RG’s Tracer, listed at 7-5, didn’t start in either the first leg of the Incredible Finale or in the Cardinal. He did finish an encouraging second in a pair two-year-old events getting ready for tonight’s stake event. 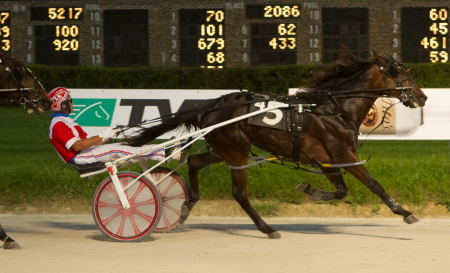 Hello Rooster (6-1), another Nelson Willis trainee, was second in the Cardinal behind Canadian Mountie when they last met. Chick Magnet’s (6-1), first two career starts, a second and a third, came against RJ Wulfy.

From the pole position out the first six slots, will be manned by: Dakota Roadster, Lincolnjames, Royale Rose, Account Hanover, He Gone Jack and Beach Ogre.

Gemini Lands the One: Two-time Illinois Harness Horse of the Year Fox Valley Gemini drew the rail Sunday evening in his $15,000 Dan Patch elimination race at Running Aces in Minnesota. Steve Weisman got the catch-drive behind the ICF star in the first of a pair of seven horse fields to determine the finalists for the July 21st Free For All Championship.