First up is the $14,000 Late Closer (No. 2) third race trot where the draw wasn’t kind to Major Legacy, the winner of this series first two legs for trainer Claude Gendreau, the opening round at 63-1 odds.

The post time favorite will likely be the Roger Welch Stable’s Shotski, (I’ve got him at 2-1)  just as he was in the first two legs when he was he was runner-up to Major Legacy at low-end odds of 1 to 2 and 6-5, respectively.

Shotski should be in good shape with the five slot for driver Todd Warren and he’ll have two un-coupled stable-mates to perhaps follow-up in Buff’s Image (pp 2, Sam Widger) and Rockinwithenest (pp 3, Todd Warren). 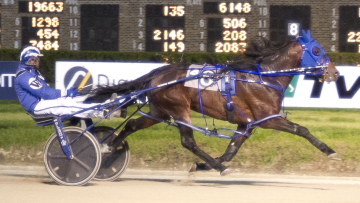 Caffeine Kid did get a big plus in the draw for posts, landing the pole position with Casey Leonard) while IYQ YQR drew the eight in the 10-horse field for the Watson Stable of Fairview, Illinois.

There’s plenty of depth in this series final with first round winner including major contenders Citizen Kane (Ridge Warren) who didn’t make his initial career start until this year at the age of five, and the Marty Eugel Stable’s Sleazy Dude (Todd Warren), second his first two career starts with a quick 27 flat last panel in last week’s second leg.

Ten-Year-Old Gets It Done: Saturday’s Late Closer (No. 6) Final for colts and geldings with winnings of over $1,000 per start was billed as a showdown between Southwind Scorpion and Sunset Dreamer who met for the first time after winning their respective first two legs. 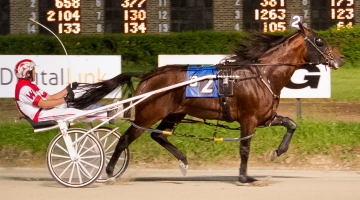 Instead it was Wolf Creek Farm’s Mr. Coolie who took the winner’s share of the $15,400 purse and as it turned out, rather easily at 6-1 odds. Driver Todd Warren put the John Zawistowski trained 10-year-old on the front end and, as they say, the rest was history.

As expected he overwhelming 1 to 5 favorite Ontario Success completed a sweep of the Late Closer (No. 5) Series, the 6-year-old gelding’s seventh triumph in eight starts this year under the care of trainer Roger Welch.

Driver Casey Leonard made his usual backstretch move with Ontario Success to take over the lead and again the issue wasn’t in doubt in the 1:51 flat mile. The 10-1 longshot Coal Hanover took second beaten one and one-half lengths.