Homepage
You are here: Home1 / Mike Paradise2 / Shakeups in Some ICF Freshman Divisions

A couple of upstarts, the filly pacer Sleazy Gal and the colt trotter Fitchey For Fun, pulled off stakes victories last weekend that sent their two-year-old ICF divisions into disarray.

While the Tom Simmons Stables Fox Valley Quest (Casey Leonard) last Sunday kept his top spot as the early leader among freshman Illinois bred colt and gelding trotters with his third consecutive victory in a $22.025 Cardinal split, the Dennis Gardner trained Fitchey For Fun (Randal Finn) also had an impressive winning first start by breezing his Cardinal event, showing he’ll most likely be a force in the 2-year-old male trot division as well.

Fitchey For Fun, a son of Cassis out of the Kadabra broodmare Magic Morgan, was much the best when he went wire-to-wire in 2:01.1, seven lengths-plus better than any of his Cardinal rivals. A few weeks earlier the colt pulled away by 17 plus lengths at the Martinsville fair for Illinois owners Dustin Fitch (Geff) and Dennis Gardner (West Salem). 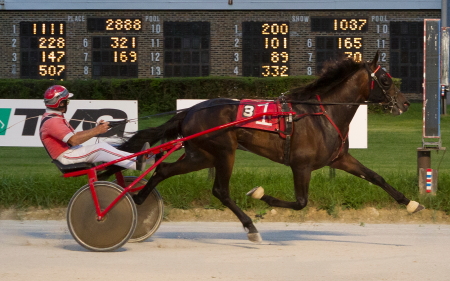 The Dennis Gardner trained 2-year-old Fitchey For Fun (Randall Finn) made a very favorable first time impression with an easy 2:01.2 victory when he debuted in a division of last Sunday’s Cardinal trot. (Four Footed Fotos)

Next up for “Fitchey” is leg two of the Night of Champions Kadabra stake series on July 14 at Hawthorne, and perhaps his first meeting against Fox Valley Quest.

Also last Sunday Bee See (Kyle Husted), who made repeated breaks as a 3-5 favorite when she bowed in a Fox Valley Flan division, bounced back in a convincing manner with a comfortable 2:01.3 win in the second $21,450 Violet.

It was a doubly sweet victory for Grant Park, Illinois trainer Steve Searle who watched stable-mate Lous Abagail follow her June 18 Fox Valley Flan triumph with another trip to the winner’s circle by taking the initial Violet trot event in 2:03.3.

The Erv Miller trained Sleazy Gal’s ($9.80) Saturday night’s winning 1:56.1debut in a $22,775 Violet pace event shouldn’t have come as much of a surprise After all the Sagebrush filly out of the dam Da Sleazy One, is a full sister to former Illinois Two-Year-Old Pacing Fillies of the Year Sleazy Does It (2011) and Thesleazyprincess (213)

Sleazy Gal, owned by her breeder, the Engel Stable of Northbrook, Illinois, will make her next start Saturday while being pointed for the for the July 12th second round of the Incredible Tillie where unbeaten Double Parked, three-for-three, is also headed. Double Parked (Travis Seekman) paced a quick 26.2 last quarter in her 1:56.2 Violet win.

A Night Off: It’s short week on the Hawthorne track with no racing tonight on the Fourth of July.

The various Night of Champion stakes series events also take a weekend off and will resume with the second round of the Incredible Finale (pacing colts), Incredible Tillie (pacing fillies) on Friday, July 12 and Saturday July 13, respectively. Leg two for the pair of Dygert juvenile trotters will be contested on Sunday, July 14.

This Friday’s feature will be a $12,000 Open Pace. With ICF star Fox Valley Gemini heading to Minnesota for the Dan Patch stake at Running Aces, it was another Terry Leonard trainee; Stuckey Dote assigned the outside seven-post.