Tyler Shehan is in his third season competing at Hawthorne and the Kentucky native is having his best local meeting, currently in the Top Five in the driver colony.

The 35-year-old Shehan is getting more opportunities with “live” drives than he has in the past at Hawthorne. However it’s that of the year when Tyler returns to his home state and competes in Kentucky stakes. Shehan had two Kentucky bred stakes Friday at Lebanon Raceway 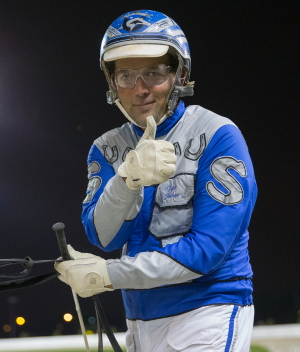 Driver Tyler Shehan gave a “thumbs up” after steering Majistic Caprice to his victory in a second leg of the Erwin F. Dygert stake series. (Four Footed Fotos)

Nevertheless, this summer it appears Tyler will try to “have his cake and eat it too.”

“I’m going to I’ll try and make it work driving at both Hawthorne and in Kentucky,” said Tyler. “I’ve got a wife and a 19-year-old son to think about and I have family in Kentucky. I’m doing well and I’m driving some competitive horses in Illinois bred stakes so I want to be here and continue with them through the end of the meet.”

Shehan has 28 winning drives at Hawthorne’s summer meet to go along with 28 second place finishers and 24 thirds.

Trixie’s Jethro, winner of a leg of the Kadabra in his debut for trainer Heather Stell, is prepping for next week’s second leg of the Kadabra tonight. Jared Finns back in the bike behind the freshman Trotter in Sunday’s third race. 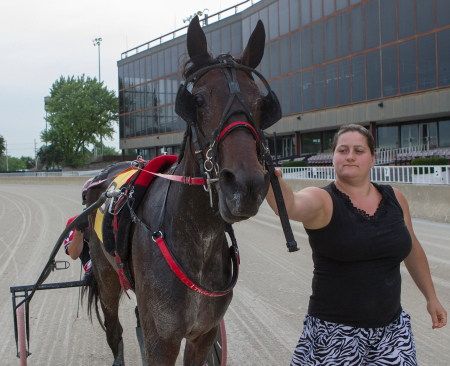 Sunday’s fourth race for 2-year-old ICF trotting fillies will be a rematch of a first leg of the Fox Valley Flan series with the one-two finishers E L Game On (Kyle Wilfong) and Heidi High (Cliff Bell) tangling again.

The Charles Arthur trained Heidi High beat E L Game On when they met in a division of the Violet on June 17 however nine days later the Mike Rogers trained filly returned the favor and overtook Heidi High in the Fox Valley Flan.

Twice as Good: Casey Leonard was in the bike behind both Open winners on Saturday’s card at 4-1 odds. The meet’s perineal leading driver gave Shelly Steele’s Picky Picky Valor ($10.20) a two-hole trip and the star of the Gerald Hansen stable responded with half-length victory (1:54.2) over Anna’s Lucky Star in the $10,000 Open Trot.

One race later Casey was back in the winner’s circle, this time with the Terry Leonard stable’s ICF mare Char N Marg ($10.60). A ground-saving inside journey put the six-year-old mare in position where her 26.3 last quarter saw her post a career fastest mile in the Open II for filly and mare pacers.