Homepage
You are here: Home1 / Mike Paradise2 / Sisters Cap Off 2020 Night of Champions 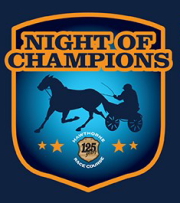 The 2020 Night of Champions at Hawthorne is in the history books and unlike last year’s card on a rainy evening and sloppy track, this one was contested over clear skies and on a fast racing surface.

A couple of siblings, Fox Valley Exploit and Allbeastnobeauty became the first full sisters to win a Super Night type championship on the same program.

Here’s how the gala evening unfolded:

A NOC Certainty: If there’s one thing you can count on in Illinois harness racing it is Fox Valley Gemini winning on Hawthorne’s Night of Champions with his driver Casey Leonard.

The now five-year-old icon of the Terry Leonard ICF made it four for-four on a NOC evening and last night’s was a rather easy five-plus length victory in the $68,000 Robert S. Molaro Memorial Final for Atwater, Illinois owner Jim Ballinger.

Fox Valley Gemini ($2.20) wore down the eventual second place finisher Al’s Hammered (Bobby Smolin) in the lane and pulled away in 1:50.1. It was career no. 39 for the Yankee Skyscraper gelding who won the Incredible Finale at two, the Carey at three and last year’s Molaro showdown as a four-year-old.

Make That Six Straight: The second championship of the night, the $88,000 For Valley Flan trot for two-year-old fillies, saw the Steve Searle trained Loulita ($2.20) make it six consecutive victories and a return visit to the winner’s circle for driver Casey Leonard.

Sent off at overwhelming 1-9 odds, the daughter of Lous Legacy, took over command soon after the 30 second first quarter, coasted to a 1:01.1 half and drew off in the lane for her breeders Flacco Family Farms of Alexis, Il who share ownership of the talented youngster with Dr. Patrick Graham of Pittsfield, Illinois. 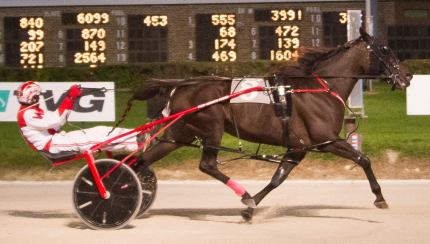 A Bomb Explodes: Saddled with the outside 10-hole, driver Travis Seekman did a terrific job of getting his two-year-old pacing filly Bootsy Bombay in position to win the $80,000 Incredible Tillie and the Nick Prather trained filly did just that, edging the 4-5 favorite Scorecard Dandy (Juan Franco) by a half-length.

Seekman hustled Bootsy Bombay ($12.40) out from the outside slot and was the third horse to have the lead by the 29.3 first quarter. Seekman quickly gave it up to Princess Moose (Kyle Wilfong) and was content to take the two-hole trip with his filly.

Scorecard Dandy had to race first-up down in the three-horse stretch drive with the winner and Princess Moose. As it turned out Bootsy Bombay picked the right time to nail down her first win on Hawthorne’s big track with a 1:56.2 mile.

Bootsy Bombay is owned by James Greer of Peoria, Illinois.

Patience Pays Off: A patient drive by Juan Franco behind the Steve Searle stable’s Lousraptor ($7.40) paid off handsomely for owner and breeder Flacco Family Farms in the $7,000 Plesac championship for older ICF trotters.

Franco ducked Lousraptor at the start as the 3-5 choice Anna’s Lucky Star (pp 9, Kyle Wilfong) worked hard for the lead, lost command, retook it over Tricky Nick and then fought Louzotic (pp 10, Kyle Husted) the last half of the mile before tiring. 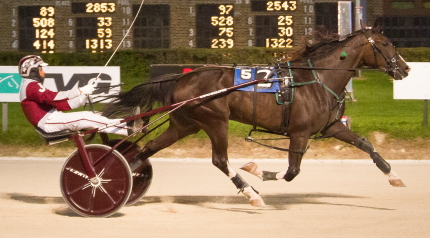 Lousraptor ‘s (Juan Franco) triumphs in the Plesac trot final was one of three championships on the Night of Champions card for breeder Flacco Family Farms of Alexis, Illinois. (Four Footed Fotos)

Lousraptor saved his best for last, closing big down the middle of the track and drawing off by almost three lengths. Louscardamon (25-1, Casey Leonard), another Searle trainee was second.

Lous Abigail (pp 8, Casey Leonard) had to battle her stable-mate Bee Cee (pp 3, Kyle Husted) to get to the front in a 29.1 first panel and both didn’t much left in the late going.

Miller had El Oh Govner in fifth most of the way and when he asked the Mike Rogers trained filly for another gear, she had it, rolling past for Palmer, Illinois owners Donald and Sherri Huddleston in 1:57.4, and knocking more than three seconds off her previous fastest winning time.

Fox Valley Quest took over the lead early on from Desert Sheik, went to a 58.2 half and then put away a stretch bid by the first over Crooked Creek, trotting a new lifetime mark of 1:55 flat for Illinois owners Carl Lacey (Athens) and Benita Simmons (Springfield).

Well Spent: When trainer Mike Brink spent $50,000 on a Lous Legacy yearling at the 2019 Illini Classic Sale some in attendance thought he might have overpaid. 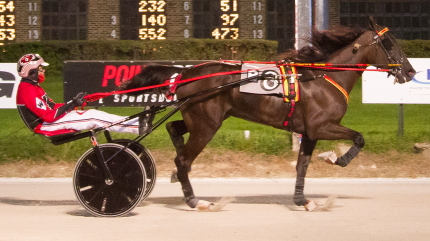 Well, it turns out he didn’t because a year later that same young trotter raked-in his sale amount and a bit more when Fistfullofdollars ($6.40) grinded his way to the $118,000 Kadabra championship in 2:01.3 for driver Kyle Wilfong and the Illinois quartet of Brink (Springfield), Darin Taurmear (Liberty) and Jeffrey Clauson (Macomb) and Mark Brown (Chatham).

Longshots Mystical Murray Jamaica Patton) at 25-1 and Loyz Say When (Marcus Miller) at 13-1, were second and third respectively.

Marcus had Well Basically ($3.80) sprinting out from the four-slot and into the lead coming out of the first turn. A modest 29.2 first panel was followed by an even slower second quarter and when the stretch drive came about, there was no catching the Erv Miller trained Sagebrush juvenile owned by Anthony Lombardi of Morris, Illinois and the (Marty) Engel Stable of Northbrook, Illinois.

Frontier Charley (pp 9, Todd Warren) came a long way to be the runner-up.

He’zzz Awfully Good: He’zzz A Wise Sky (Bobby Smolin) showed why he was hammered down to 1-9 odds in the $88,000 Robert F. Carey Jr. Memorial. The three-year-old Don Filomeno trained home-bred led from start to finish in another dominant performance. 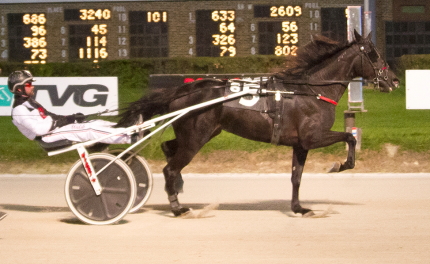 Looking Peachy: It was another heavy favorite getting it done rather effortlessly in the $108,000 Plum Peachy Final as Fox Valley Exploit breezed in that three-year-old filly pace championship by almost three lengths in 1:53.2.

Driven by her trainer Kyle Husted Fox Valley Exploit (pp 9) had to work hard to get to the top on the backside but once there it was strictly no contest. The win was her eighth in nine season starts for the Sportsmaster filly owned by Husted and David Brigham of Concord, Michigan.

Sent off at odds of 3-5, Allbeastnobeauty ($3.20) was driven by her Illinois trainer Todd Warren and despite taking a lot of air in her 1:51.4 mile the five-year-old daughter of Sportsmaster ended up two lengths ahead of Lilly Von Shtupp (Casey Leonard).

The Indiana owned mare won for the tenth time this year, putting her season earnings over the $100,000 mark.

Sit Back and Enjoy the Night of Champions New Medication Rules Begin Oct. 1
Scroll to top