By Mike Paradise
Two weeks ago the freshman Slzburgerslzburger raced with a $7,500 claiming tag (plus allowances) and there were no takers. Next week the Nelson Willis trained gelding competes in the $18,500 Cardinal Pace Final after powering his way to a surprising victory in the second of three ICF 2-year-old colt or gelding eliminations. 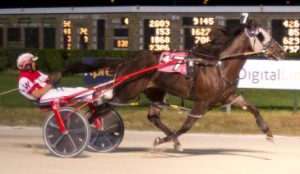 Sent off at 9-1 odds from the outside slot in a seven-horse field driver Todd Warren had Slzburgerslzburger racing in the middle of the field through the first half (57.3) of his elimination division. Midway into the last turn the winner was still about six lengths behind.
However Slezburgerslzburger ($21.40) proved fastest when it counted, overtaking the early leaders with a 27.3 final quarter and posting a season best mile of 1:54.3 for his owner and breeder (Marty) Engel Stable of Buffalo Grove, Illinois.
Joining the Sagebrush freshman in the final will be the second and third place finishers of the race, Fox Valley Sparty and Fox Valley Hoss.
In the first Cardinal Pace elimination division Kyle Wilfong put the 3-5 favorite Fox Valley Jeter ($3.20) on top right after the first quarter (29.4) and the Jim Eaton trainee went on to win handily in a season best time of 1:54.4. Also advancing to the $18,500 Final was the second place finisher Uptown Sleaze and the third horse Fox Valley Reggie. 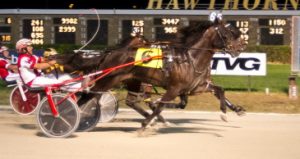 The third elimination division looked to be an evenly matched field and it turned out to be just that as Gabe Henry flew down the late to nip Incredible Finale champion Fox Valley Herbie in the last stride and give Todd Warren is third winning drive in the first six races on the card. Todd would end up with a four-bagger on the 10-race card.
The 4-5 favorite Fox Valley Herbie was given a change of tactics by driver Mike Oosting after two straight strong come-from-behind victories and powered from fifth to first on the backside, taking the field to a 57.2 half while Warren had Gabe Paul next to last in the field of six.
The pocket-horse Fox Valley Inferno (Casey Leonard) was full of pace but lacked racing room while Fox Valley Nemitz was also turning it on in the lane but no horse was going faster than the Tom Graham Jr. trained Gabe Henry who zipped past for his seven win in 10 starts for Salem, Illinois owner and breeder Carl Graham.
Fox Valley settled for second but made the final and so did Fox Valley Inferno, beaten about a half-length.
A drawing will take place to determine which fourth place finisher, Sullivan, Spirited Encounter or Fox Valley Nemitz, also makes the 10-horse Cardinal championship field
Saturday’s first race trot was a prep for next weekend’s Cardinal Trot Final for ICF two-year-old males and it tuned out be a front-end victory for the Hosea Williams Stable’s Polar B ($8.00) nicely rated by Warren.
Polar B won the battle for the front and then kept the 85-1 longshot Dr. Spengler parked-out while he cut fractions of 39.4, 59.1 and 1:29.2 and won for the third time this season for owner Wayne Temple of Mokena, Illinois.
Lougazi came on well to be second in the 1:59.2, beaten a little less than one length.
Violet Elims Next: The finalists for next week’s $18,500 Violet Pace Final for ICF freshman fillies will be determined tonight. Two 10-horse eliminations divisions, the eighth and ninth on the 10-race card, will see the first five finishers in each advance to the last state-bred stake championship for the 2016 season.
Also on the Sept. 24 program, Hawthorne’s last harness racing card of the year,, is the $18,900 Violet for ICF 2-year-old trotting fillies. Eight of the nine finalists are competing tonight in a prep race including Ann’s Lucky Star (Kyle Wilfong), unbeaten in five career starts for owner and breeder Danny Graham.
The Nelson Willis filly takes on Sis’s Ellie Mae, Lou’s Game N Match, Fox Valley Ella, Heartland Honey, Daisy Lou Duke. Beatrice and T E’s My Way. Getting another week’s rest by skipping Sunday’s race is last weekend’s Fox Valley Flan champion Fox Valley Elana.
http://harnessillinois.com/wp-content/uploads/2021/03/ihha_logo_white_wtext_v2-300x130.png 0 0 Mike Paradise http://harnessillinois.com/wp-content/uploads/2021/03/ihha_logo_white_wtext_v2-300x130.png Mike Paradise2016-09-18 14:15:512016-09-18 14:15:51Slezburgerslzburger Finds Recipe for Success