Homepage
You are here: Home1 / Mike Paradise2 / Some Big Surprises in ICF Stakes

It didn’t take long last night for a stunning upset to put a smile on the faces of some longshot players when the 2-year-old gelding Illinimight picked the right spot to pick-up his maiden victory. 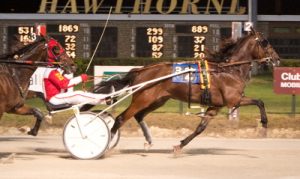 Driven by his Springfield, Illinois based trainer Mike Brink, the 15-1 longshot Illinimight ($33.80) took advantage literally of some breaks and racked up a winning 2:00.2 mile in the $16,000 Kadabra stake for state-bred male trotting freshmen.

The heavy 2 to 5 favorite True Detective, winner of 5 of 7 career starts, including the previous two Kadabra series legs, looked to be in great shape to reward his many backers with a two-hole trip behind the 44-1 longshot pacesetter Fox Valley Strpwr but coming out of the last turn he went off stride, making it any trotter’s race.

It turned out to be Illinimight’s race as he rallied down the lane to grab command and then held off a late bid by Cruzen Cassi who started galloping soon after the gate sprang open and still finished second. Fox Valley Strpwr held on for third.

Owned by Kevin Miller of Arthur, Illinois, Illinimight was given a patient three-hole trip by Brink and it paid off with a one length victory.

Chalk players could breathe a sigh of relief when unbeaten Fox Valley Gemini (Casey Leonard) left no doubt he’s the kingpin of the ICF 2-year-old colt and gelding pace division with a decisive two and one-half length triumph in the first Incredible Finale stake division.

Sent off at prohibitive 1-9 odds, Casey sent Fox Valley Gemini to the front on the backside and the Terry Leonard trainee went on to make it eight in a row with a 1:53.2 clocking for owner Jim Ballinger of Atwater, Illinois. 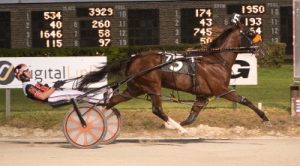 Husted, who also trains Fox Valley Hijinx, hustled his freshman pacer to an early lead, then settled in the two-hole when Bobby Smolin took Hart To Heart out from the middle of the pack and into command with a 27 and change second quarter.

In the lane, Husted took the winner to the inside where the Yankee Skyscaper gelding powered his way to his second season win in 1:54.1 for Michigan owner David Brigham. 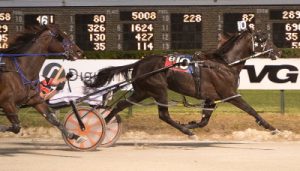 Another major upset occurred in the first division of the Robert S. Carey Memorial when Slezburgerslzburger ($42.80) overcoming the 10-hole with a gutsy 1:52 flat victory with driver Kyle Husted.

Hurried away from the outside post Slzburgerslzburger was dropped into sixth in the early going. The Matt McKenzie trained 3-year-old came out on the backstretch and raced without cover the rest of the way and still gained a one-length victory over the favorite Fox Valley Inferno for his owner and breeder Engel Stable of Buffalo Grove, Illinois.

The second Carey division saw a change of tactics by the Tom Simmons Stable’s Fox Valley Herbie ($4.80) who usually comes from further out of it for his regular driver Mike Oosting. This time the sophomore pacer sprinted out and grabbed the three-hole.

When the 50-1 longshot Uptown Sleaze and Captain Rhett battled hard through middle quarters of 27.2 and 27.3 Oosting waited with Fox Valley Herbie for the stretch drive where the winner rallied past for a 1 and 1/4 length triumph in 1:52.3 over Uptown Sleaze, saddled with the 10-hole in a 11-horse field.

Earlier on the Saturday 12-race card the Flacco Family Farm’s Louscipher (Casey Leonard) continued his dominance of the ICF 3-year-old colt and gelding trotting division when he wore the front-steeping Picky Picky Valor in the fourth and final leg of the Erwin F. Dygert Memorial stake series with a career best mile of 1:55.1.

Trained by Roshun Trigg for his Alexis, Illinois owners, Louscipher ($2.20) was pulled out of fourth before the last turn, grinded his way towards Picky Picky Valor (Brian Carpenter) and then surged past in the late going for his ninth win in 16 season starts and his fourth in a row.

The $15,000 Robert S. Molaro single elimination for state-breds age three and up went to the even-money choice Evergreen Elite (Mike Oosting). The Ken Rucker trained 5-year-old zipped past in the lane to win in 1:52.2. Gibbs made a late charge to be second. The 10th place finisher Caffeine Kid was eliminated form next Saturday’s final.

Top Trotters Tangle: A $13,500 Open Trot is Sunday’s feature with a full-field of 10 horses going to the gate in the seventh race.

The co-favorites are Angie Coleman Stable’s Banker Volo (5-2, Kyle Wilfong) assigned the outside 10-post after his victory two weeks ago in an Open Handicap at Running Acres, and Big Expense (3-1, Kyle Husted), with the six-slot, the runner-up at Hawthorne last week ago as the even-money favorite.

Final Chance for “The Boys” to Gain Championships Fall Reviews return to Springfield.
Scroll to top