The road to Hawthorne’s Night of Champions begins Saturday evening for ICF pacing fillies with the first legs of the Plum Peachy stake series. A total of four series legs will be contested at the summer meet with the 10 highest point earning fillies securing a spot in the late September championship.

As we discussed in Friday’s column points are earned thusly: 50 for first, 25 for second, 12 for third, 8 for fourth, 5 for fifth and 1 point for starting in a series leg.

With 19 fillies entered for round one there will be two $12,500 Plum Peachy divisions on tap. The fifth race first division has last season’s freshman champion Fox Valley Jazzy (pp. 7, Ridge Warren) at opening odds of 8-5 with the Mike Brink Stable’s right there at 9-5 first flash odds.

I have no problem with those early odds. Both fillies match-up well for their first of several slugfests during the summer, starting at Hawthorne and moving to the State Fairs and Springfield and Du Quoin later in the summer. 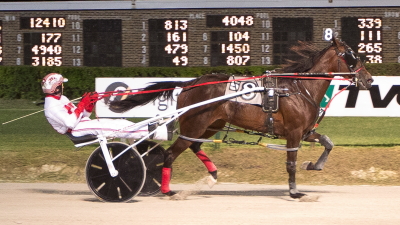 The Dale Kanitz trained Fox Valley Jazzy finished second best by three lengths to Allbeastnobeauity in an ICF filly prep event two weeks ago. Both fillies were making their initial start of the season since last year’s Incredible Tillie Final on September 23rd and both should be tighter for tonight’s Plum Peachy event.

The tenth race second Plum Peach division has three fillies that are all possibilities as the public’s choice at post time.

The Steve Searle Stable’s The New Americana (Matt Krueger) is listed at 2-1 in the program after banking nearly $70,000 as a freshman campaign where she chalked up a half dozen victories, including the Springfield championship for Illinoisans Dave Falzone (Chicago), Jim Molitor (Oak Lawn) and Steve Leita (Rockford)

Rodney Freese’s Fox Valley Catwalk (Tim Curtin) is listed next at 5-2 early odds. While the Sportsmaster filly wasn’t a major player as a 2-year-old, winning 1 of 9 starts, she’s come in a big way in her second season. She’s a 5-time winner in 10 tries and swept the Carl Becker Late Closer series this past winter at Hawthorne. Fox Valley Catwalk already has over $30,000 on her card in 2018.

Rollin Coal (3-1, Casey Leonard), owned by her Chicago trainer Hosea Williams, was third or better in 13 of 14 first season starts, raking-in over $90,000 and was the Incredible Tillie runner-up on the 2017 Night of Champions.

The Sagebrush filly has been a model of consistency with 5 wins and 5 seconds in her 14 races last year. However, Rollin Coal hasn’t been postward since last October due to some health issues. Nevertheless she qualified nicely a week ago with a 27.2 last quarter and can show gate speed from the 8-slot if asked, 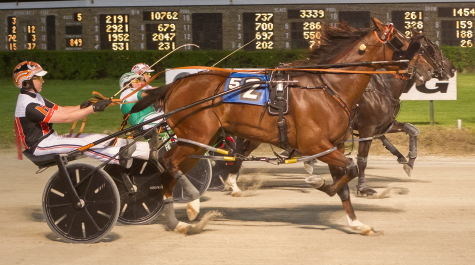 Fox Valley Hijinx (No.2, Kyle Husted) is about to get up in the final stride to capture Friday night’s first Carey stake series division over Molina (middle) and Dandy Dude (no. 8 inside). (Four Footed Fotos)

Friday’s 12-race card also has a $10,000 Open I Handicap Pace for fillies and mares will be race nine with the Rodney Freeze Stable’s Pretty Image (Tim Curtin) in search of her third consecutive Open win at the meet.

The $16,000 Cicero Claiming Series Final for horses and geldings goes as race five while the same series final for pacing mares is slotted as race seven. Both have enticing $16,000 pots.

Friday’s Wrap Up: The first of three opening round divisions of the Robert F. Carey Memorial stake series turned out to be a three-horse photo with Fox Valley Hijinx ($6.00) coming on in the late going to nip runner-up Molina (Tim Curtin) by a nose and the pace-setting Dandy Dune (Ridge Warren) by a neck.

Trained by his driver Kyle Husted, the victory was the first in a trio of season starts for the 3-year-old Yankee Skyscraper pacer owned by David Bingham of Concord, Michigan.

Husted was back in the winner’s circle in the next race when he gave the Tom Simmons Stable’s Backstreet Lawyer a winning inside trip in a career fastest time of 1:50.4 in the second $12,500 Carey division.

The Tom Simmons Stable’s Backstreet Lawyer was standing tall after his Carey series victory in a career best time of 1:50.4. He was one of four winners on the card for driver Kyle Husted. (Four Footed Fotos)

The 3-5 favorite You’remyhearthrob (Kyle Wilfong) grabbed the early lead (28.2) but had to pace a 27 flat second quarter to keep the 47-1 longshot Ernie The Mooss from taking command at the 55.2 half. All the while Husted had Backstreet Lawyer third on the inside patiently waiting for the stretch drive.

Fox Valley Gemini (Casey Leonard) once again proved to be much the best last night. The unbeaten Terry Leonard trainee crushed his Carey division foes by more than five lengths in 1:51.4 while under a hold and is now 12-for-12 lifetime for his Atwater owner Jim Ballinger.

The 3-5 favorite Trashytonguetalker (Casey Leonard) had no trouble disposing of is five foes in the $10,000 Open Pace. The Terry Leonard trained gelding led at every pole of the 1:50.4 mile and is now 6 for 8 on the year.

Casey was also behind the $10,000 Cicero Claiming Series Final winner Electric Albert ($4.00) who took advantage of a pocket trip and nipped R. Duneside at the wire by a nose.

Later in the evening Casey then guided Her Royal Hottness ($6.00) to her 1:54 victory for trainer Gerald Hansen in the $10,000 Cicero Claiming Series for fillies and mares.

Leonard (five) and Husted (four) between them drove 9 of the 12 winning horses on the Hawthorne program.