Homepage
You are here: Home1 / Mike Paradise2 / Spotlight on Trotters Young and Old

The reappearance of the circuit’s Open for trotters is Sunday’s Hawthorne headliner however it will have to share the spotlight with a two-year-old event that could give us a preview of what to expect when harness racing at the Illinois State Fair in Springfield gets under way next weekend.

Hawthorne’s sixth race saw lured a number of ICF freshman trotters, including three fillies with one or more stake triumphs already on their list of accomplishments—Funky Wiggle, Armbro Lark and Romantic Warrior.

The trio likely will get plenty of public support on Friday’s opening day of racing at the Springfield Fairgrounds when the Illinois State Fair Colt Stake eliminations for all Illinois bred two-year-olds will be contested.

The conditions for Sunday’s sixth race at Hawthorne allow fillies to draw inside and that’s where you’ll Funky Wiggle and Armbro Lark, with posts one and two, in that order. The Gary Rath trained Romanic Warrior, a Cardinal division winner, landed the five slot.

Trainer Curt Grummel turns over the lines tonight on Funky Wiggle to Kyle Wilfong, currently Hawthorne’s second leading driver. The Dr. Patrick Graham owned, and bred filly comes off a 1:58.4 front-end win a week ago. Grummel had the daughter of Lous Legacy well prepared from the get-go. Funky Wiggle won her opening leg of the Fox Valley Flan series in her June 27th debut. 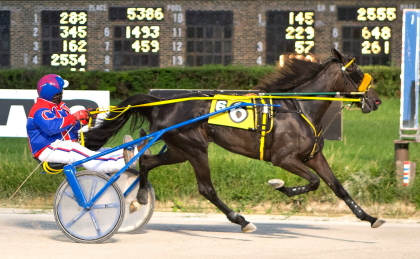 Trainer Charles Arthur also had Armbro Lark ready to rock right from the start. The Up Front Murry filly was much of the in her first leg of the Fox Valley Flan. Armbro Lark also breezed in the July 12th “Flan” leg for Mississippi owners Ms. Fabian Johnson and Mr. RB Roper.

Only a bad break (no pun intended) kept Armbro Lark from also winning her Violet division. The filly went off stride in the late going while on the lead and ended up second. After her first five career starts, Armbro Lark has almost $25,000 on her initial season card.

It’s Back: Hawthorne’s $12,000 Open for trotters is returns tonight and that means the talented veteran trotter Pine Dream (Todd Warren) is back on her home track.

The nine-year-old gelding last competed at Hoosier a week ago when our Open wasn’t carded for back-to-back, necessitating a trip to Indiana for trainer Merv Chupp to get the star of his stable raced.

In eight Hawthorne Opens this summer Pine Dream has prevailed three times and finished second in four others, hence the race office assigned outside seven-slot tonight. Even with 47 career victories to his credit, Pine Dream is the third programmed choice.

The 2-1 first flash favorite is Annas Lucky Star who has 41 lifetime wins of her own and in a few years less of racing than Pine Dream. Annas Lucky Star, a Nelson Willis seven-year-old looks, appears to be back in top form, breezing a week ago in a Hawthorne Open II event with tonight’s driver Travis Seekman.

The 3-1 first flash second choice is the Steve Searle’s trained Louzotic who landed the pole position and is only a couple of wins away from 30 successful starts despite being only a five-year-old.

Magee Rhee came roaring down the lane in 26 seconds flat to post a half-length win over My Uptowne Girl (Ridge Warren) with a 1:52.2 mile. The first up Rock It Out (Kyle Wilfong) finished third.