By Mike Paradise
Another storm swept through the Springfield area causing Tuesday’s scheduled racing card to be moved to Thursday afternoon with its 10-race pari-mutuel race program and four early non-wagering events.
A quartet of Illinois State Fair Colt Stake championships will be decided on Thursday.

With only three horses going postward the $7,000 Aged Trot it was designated as one of the non-betting races that will get under way at 11:30 am. Mike Brink’s Rock Hollywood (Casey Leonard), J D Finn’s Captain Greedy (J D Finn) and Gene Williams’ Riet’s Kid (Robert Decker) will slug it out for bragging rights for ICF horses and geldings ages four and up.
The $7,000 ISFC stake for aged mare pacers will be the first race Thursday opener on the betting card that gets under way at noon. The four horse field consists of Fox Valley Charm (Todd Warren), Feel Like Dancing (Kyle Wilfong), Incredible Tilly (Mike Rogers) and Perched On Top (Jamaica Patton).
Fox Valley Charm, who hails from the Rodney Freese barn, is the heavy 1 to 2 program favorite based on the strength of her season competition. The 4-year-old daughter of Yankee Skyscraper comes out of the rugged Open Pace races at Hawthorne and earlier was racing in the Preferred events at The Meadows in Pennsylvania.
As a 3-year-old Fox Valley Charm captured the Time Dancer stake at the Du Quoin State Fair.
The fifth race $7,000 ISFCS for older state-bred horse and gelding pacers brings out Dixie’s Boy (5-2, Dale Hiteman), Fiveknuckleshuffle (6-5, Bobby Smolin), Fourboltmane (Tim Curtin) and Dinky Dune (3-2, Pat Curtin).
The Brink Stable’s Fiveknuckleshuffle comes off a 1:52.4 victory in Hawthorne’s Open Pace. The 6-year-old raked in almost $80,000 last season, winning eight times. 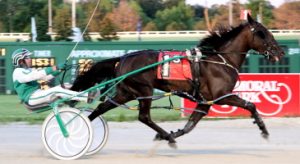 Dinky Dune, owned by his trainer Dane May, had a 1:51.4 win earlier this year at Hawthorne. As a 3-year-old he pulled down $84,419 and captured Super Night’s Langley Championship and the Cardinal Final at Balmoral and the Dudley Hanover at Du Quoin.
The Kennedy Linsey Stable’s Shez So Sassy (Casey Leonard) will open up as the 3-2 favorite in Thursday’s ninth race ISFCS for trotting mares. The Powerful Emotion mare has four season triumphs.
She’ll be challenged by Ants Iner Pants (5-2, Kyle Husted), Sara The Spy (10-1, Matt Krueger), Macie Rae (3-1, Ridge Warren) and Maple Grove Karen (5-1, Jamaica Patton). Longshot Sara The Spy does have a fondness for Springfield. The stake’s defending champion as a youngster won the 2-year-old State Fair Final.
Thursday’s fourth race, a $5,000 Illinois Department of Agriculture event for state-bred 2-year-old fillies brings out Princess Sage, one of the top youngsters in her division. The home-bred filly is 4-for-6 in her first season and two of those wins came in the first and third legs of Hawthorne’s Incredible Tillie stake series for driver-trainer Freddie Patton Jr. who also shares ownership of the Sagebrush filly with breeder Kelli Joe Bell of Windsor, Illinois.
The fastest mile of the Thursday program, and maybe for this year’s Springfield meet, could come in the tenth race, a Topline event for 3-year-olds and up. Starting in the middle of the seven-horse field is Clinard Properties Somestarsomewhere from the Springfield based barn of Tom Simmons.
Now five, as freshman the well-bred pacer rattled off a 1:49.2 mile at The Red Mile in Lexington and went on to be third in the Breeders Crown Final that year, a week after he won his “Crown” elimination in 1:49.4. He was a three-time stake winner in his sophomore year and won a $15,000 Open at Hoosier Park a few weeks ago in 1:50.3.
http://harnessillinois.com/wp-content/uploads/2021/03/ihha_logo_white_wtext_v2-300x130.png 0 0 Mike Paradise http://harnessillinois.com/wp-content/uploads/2021/03/ihha_logo_white_wtext_v2-300x130.png Mike Paradise2016-08-16 13:15:282016-08-16 13:15:28Springfield Aged Horse Championships Moved to Thursday