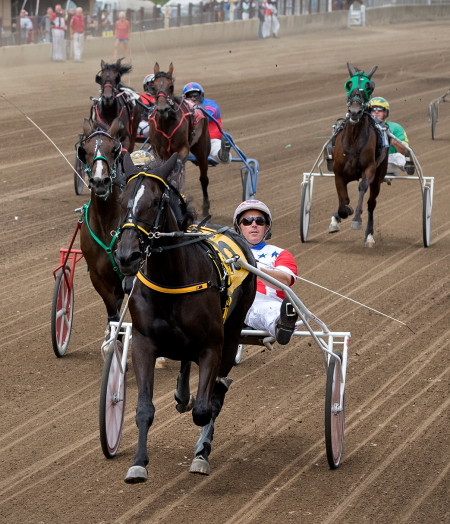 They’ll be coming down the lane 43 times at Springfield this weekend 43 times in two days of racing. (Four Footed Fotos)

When I was printing out of past performance lines for Friday’s and Saturday’s Springfield races, I thought something went awry with my printer.

Turns out there was nothing wrong with the printer, it was the number of races it had to print out. Twenty-two for Friday and 21 for Saturday.

An astonishing 300 horses entered the weekend Hawthorne cards on the Illinois State Fairgrounds. To say it was a surprise would be an understatement. I was shocked at the number. There was talk of a possible horse shortage for the summer meet. I think those 300 entries put an end to that discussion.

Looks like a Goodie: Thumbing through the 22 paces of horse’s lines for Friday, what stood out was the ICF Open trot, late in the program.

Race 19 is the ICF Open and it’s an intriguing affair.

The ICF Open has five sons or daughters of Lou’s Legacy taking on three others that are not and that trio is strong. It’s comprised of the 2021 ICF Trotter of the Year Talk About Valor (pp 6, Travis Seekman), the multiple Illinois trotting mare of the year Annas Lucky Star (pp 7, Kyle Wilfong) and Heath Bar (Jamaica Patton) the runner-up in last week’s state-bred Open. 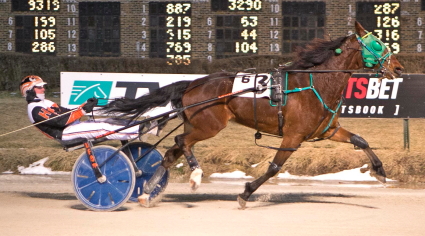 The Gerald Hansen Stable’s star trotter Talk About Valor qualified last week at Springfield by breezing on the front end in 1:56 flat. The seven-year-old trotter closed out the earlier meet at Hawthorne by demolishing the last two Open fields by more than three lengths and then by eight and goes into today’s action 5-for-8 on the season, all in Hawthorne Opens.

Easy Money: Indiana based trainer Tyler George sent a pair of his good mares to pick-up some easy dough ($3,759 winner’s share) in filly and mare Opens today and both were assigned the outside six slots for each event.

Moneymakehersmile (Kyle Wilfong) heads up race 15. The six Mach Three mare paced a 1:50.3 mile last year at Hoosier and comes off a 1:52 flat win at the Indiana racetrack.

In the following event is Sandy Sue, (Casey Leonard) a seven-year-old Shark Gesture mare with a mark of 1:50.4 last season at Hoosier and a 1:51.4 win this year at Miami Valley Raceway in Ohio. She’s been competing recently in Indiana Opens.