Saturday’s Fall Classic at the Springfield Fairgrounds got a ringing indorsement from Illinois harness horsemen when 75 Illinois conceived and foaled 2 and 3-year-olds were entered, enabling 14 races to be carded for either two or three-year-olds of both gaits and sexes.

With $50,000 available in purse money funded by the Illinois Depart of Agriculture, the 14 Fall Classic purses were distributed equally making each race worth $3,571.

The IIHA make available the purse money for a quartet of races for older ICF events for pacers and trotters that will follow.

The 18 race program will get away at 11 o’clock in the morning and will be run off in 15 minute intervals with the final race projected to go off at 3:15 in the afternoon.

Several interesting battles shape up on the Fall Classic card. 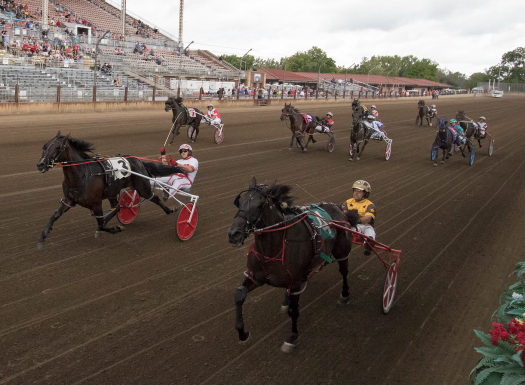 They’ll be coming down the stretch 18 different times Saturday when the Fall Classic is contested at the Springfield Fairgrounds. First post is 11 o’clock in the morning. (Four Footed Fotos)

For instance the fourth race second division of the 2-year-old filly trot will have Steve Renard’s Loussolataire, the winningest freshman trotter in the country with 16 victories, take on E L Game On and Puddin Cheeks, the one-two finishers in the $25,000 Shawnee stake at the Du Quin State Fair and both of those fillies also nailed down wins in legs of Hawthorne’s Fox Valley Flan stake series,

The sixth race second split of the 3-year-old filly pace will be headed up by the Mike Brink Stable’s Allbeastnobeauty who posted a four race winning streak earlier when she annexed both the Springfield crown and Du Quoin’s Time Dancer. The Sportsmaster filly finished fourth, beaten 2 and 1 /2 lengths in the $125,140 Plum Peachy Final on the Night of Champions.

Allbeastnobeaurty (pp 1, Mike Brink) has two-season earnings of $119,675, just $258 more than Hosea Williams’ Rollin Coal (Robert Smolin), who starts from post two Saturday. Among their challengers is The Sis Master (Michele Morgan), victorious in two legs of the Fox Valley Flan while Allbeastnobeauty and Rollin Coal both won at Fox Valley Flan leg at the summer Hawthorne meet.

The second division of the sophomore pace for colts and geldings consists of Herecomesdmagotta, Al’s Briefs, Flying Marvin, Song Cycle Senese and the ultra-consistent Backstreet Lawyer from the barn of Tom Simmons.

Backstreet Lawyer, a Sagebush gelding, had competed all season long against NOC winner Fox Vale Gemini, the 2017 Illinois Harness Horse of the Year, and Springfield champ You’remyhearthrob, twice successful in 1:50.3, and Backstreet Lawyer still was able to finish third or better in all 17 of his second season starts.

A four-time season winner, Backstreet Lawyer boasts a 1:50.1 victory this summer at Hawthorne, to go along with eight second place finishers and five thirds, banking just under $70,000 for the Illinois partnership of Engel Stables Buffalo Grove), Jerry Graham (Salem) and Benita Simmons (Springfield).

Another ultra-consistent ICF horse racing Saturday is the ICF 3-year-old filly trotter Maui Mama, trained by Mike Brink for Morton, Illinois owner Bill Wright. The Cassis filly has gone to the gate 19 times in her first two campaigns and has never finished worse than third while hauling in almost $128,000.

Maui Mama won her first two legs of the Beulah Dygert Memorial Series and was third on the Night of Champions. The filly was third in the Springfield Final and runner-up to division leader Trotting Grace in the Windy Skeeter at Du Quoin.

The second 3-year-old colt trot event, race 14 on the card, will see division rivals Illinimight, from the barn of Mike Brink, and Majistic Caprice, trained by Roshin Trigg slug it out. Illinimight captured the Springfield championship and Majistic Caprice got revenge when he took Du Quoin’s Pronto Don stake.

Illinimight was the victim of an interference break as the even-money choice in the Erwin F. Dygert Championship, trailing by more than 15 lengths at the half and still got third on the Night of Champions, making up 10 lengths on the field.

That’s All Folks! Some Interesting Facts from NOC
Scroll to top