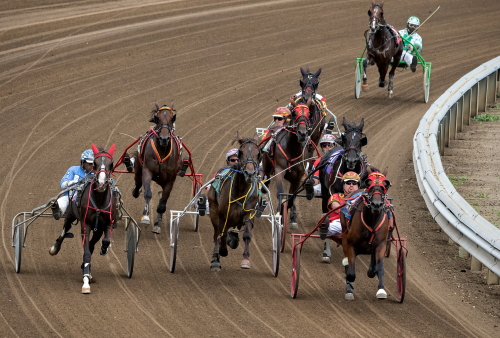 They’ll be “spinning out of the turn” Friday afternoon when the Springfield State Fair harness racing meet gets under way. First post is 12 noon. (Four Footed Fotos)

Harness racing swings into action today at the Springfield State Fair, with the first of a ten race card going postward at 12 noon. At stake in a number of ICF events is a starting berth in one of the eight two-year-old Illinois State Fair Colt Stake championships next Thursday.

In some cases, such as the two divisions of the freshman filly trotters, getting into a final won’t take much. Eleven fillies entered making it necessary for a two division split. All five fillies in the first race will move on to the final, while in the third race second division, only one of the six starters will be eliminated.

However, it’s going to be a lot tougher to gain the ICF two-year-old colt and gelding trot showdown. With 17 horses passing the entry box, there’s an eight horse field in one division and nine young trotters heading to the starting to the gate in the other.

Likely to get a good portion of the public’s wagering in the fourth race – second filly split are Double Parked (pp 8, Travis Seekman) and June Dale Gram (pp 2, Casey Leonard).

Double Parked, owned by her Tennessee native trainer Leroy Hunt, breezed in both of her first two Incredible Tillie series legs and is 5-for-, in her initial campaign season. Nevertheless, June Dale Gram overtook her in their Violet match-up for trainer Tom Graham Jr. in just the filly’s second lifetime start. The home-bred, Carol Graham owned, June Dale Gram hasn’t been postward since. 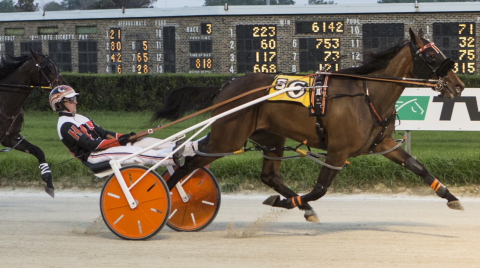 While Friday’s tenth and last race doesn’t have anything on the line, except its $6,000 purse since all 3-year-old male trotters advance to next week’s $29,000 championship, it appears to be the best betting race of the program.

And don’t be deceived by the 10-post today on two-time stakes winner Lousraptor. They line up nine across at Springfield, so Lousraptor starts right behind Lourhianon in today’s prep. For that matter, Casey can choose to put the Roshun Trigg trainee right behind any other horse in the race since there are no other “trailers.”

Scheduled post time on the last Springfield race is 2:15 pm and hopefully it will go off on time. First post at Hawthorne tonight is 7:20 pm. While the drive back to Chicago is normally a little more than three hours, with Illinois annual summer-time expressway construction and the likely heavy traffic between 3 and 7 pm, it could get a little hairy for horsemen to return to Hawthorne on time.