Today’s scheduled beginning of racing at the Springfield State Fair got off to a soggy and delayed start. Heavy overnight rains caused the opener to be postponed until tomorrow (Saturday morning) at 10 am. The originally scheduled Saturday races will begin immediately following those races.

This year Springfield’s races are being simulcast nationwide for pari-mutuel wagering. Fans can watch and wager at OTB’s in Illinois along with anywhere else showing races and all major ADW platforms.  Additionally, the Illinois State Fair website (https://www.illinois.gov/StateFair) will have a live feed showing all of Springfield races.

The first Springfield card is an extremely important one for trainers and their owners of ICF 2-year-olds of both gaits and sexes.

Eight Illinois State Fair Colt Stake elimination events, races two through ten, will determine which horses will advance to those championships which carry a $48,000 purse for state-bred freshmen and a $44,000 purse for sophomore pacers or trotters.

The first two races in the opener are preps for the 3-year-old ICF trotters, with division leaders filly, Anna’s Lucky Star (Kyle Wilfong), the one too beat in the opener and Louscipher (Casey Leonard) and Muscle Image (Mike Oosting), the one-two finishers in a recent leg of the Erwin Dygert, likely getting a good portion of the betting dollars in the colt and gelding event.

All of the opening card elimination races will see the first five finishers in each race advance to a championship on the Wednesday, August 16th program.

Mike Brink, the defending Springfield trainer champion, is sending out eight horses on the first program, the same number as Mississippi native Roshun Trigg.  Freddie Patton Jr, another Mississippian, will have seven from his barn competing in the Springfield opener. 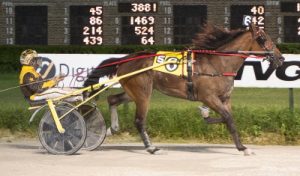 Vic’s Pizza didn’t make his debut until the July 2nd Cardinal elimination. He made a break in it, but still managed to make the final, where he started from the second tier and was second best to True Detective and again in their July 23 match-up leg of the Kadabra.

Vic’s Pizza romped last week at Hawthorne preparing for Springfield and drew into the much softer seventh race first division elimination split, so much so that Vic’s Pizza is listed at 2 to 5 in the Springfield morning line

The second division landed both Cardinal and Kadabra champ True Detective (1-1, Casey Leonard) and the John D Finn Stables Cruzen Cassi (5-2, Jared Finn), an earlier Kadabra victor. She also came out on top in her last two starts, a Downstate Classic at Lincoln and an Illinois Stallion Stake at Charleston.

They’ll be up against unbeaten division leader Fox Valley Gemini (Casey Leonard), looking to go 5-for-5 for owner Jim Ballinger of Atwater, Illinois. The Terry Leonard trained youngster swept the Cardinal and breezed in his Incredible Finale Leg in the month of July to earn opening odds of even-money.

The Illinois State Fair Colt Stake eliminations for 2-year-old filly pacers will have a pair of 10 horse fields and will go as races 4 and 6 on the first card.

The Steve Searle’s The New Americana (8-5, Mike Oosting), fresh off victories in a leg of Hawthorne’s Incredible Tillie and a Illinois Stallion stake at Charleston, looks to be in good shape with the four-slot.

However Violet champ Rollin Coal (9-5, Casey Leonard), didn’t fare well in the draw for post positions. The Hosea Williams owned and trained filly landed the second tier 10-hole and has her work cut out.

The draw didn’t get any better for Fox Valley Jazzy (8-5, Ridge Warren), who beat Rollin Coal last week at Hawthorne and notched a first leg division of the Incredible Tillie. The Dale Kanitz trained filly also drew the 10-slot.

The Nelson Willis Stable’s Lex Two (9-2, Juan Franco), a come-from-behind winner two weeks ago in an Incredible Tillie division landed the three-post, just inside of Red Hot Packerette (9-1, Mike Oosting), who was nosed out in that same leg of the Incredible Tillie.

An Open Open: Friday night at Hawthorne the $13,500 second race feature brings out the meet’s last two Open Pace winners Let’s Drink On It (Travis Seekman) and A Bettors Risk (Kyle Wilfong), who have the two outside posts, the 5, and 6, in that order.

Herman Wheeler’s Major Bliss (pp 4, Bobby Smolin), 8 for 9 this year, is back from Ohio where he won in a career fastest 1:51 flat mile on the five-eighths track at Scioto Downs in an Open Pace.

The fifth race secondary is a $9,000 Open III where the gals drew for the three inside slots, while the boys will have the trio of outside posts. The 5-year-old OK Heavenly (Casey Leonard), is back on her favorite track with over $70,000 on her season card and is listed as the 2-1 favorite. Another mare, Vintage Babe (Jim Lackey), is next at 5-2. The third mare is Wings (7-1, Tim Curtin).