When the bugle call sounds off for Saturday night’s Hawthorne opener you’ll get a look at a field of nine 2-year-old pacers in the post parade all aspiring to make that first major step to the Incredible Finale Championship later in the season.

A $12,000 purse will be on the line in the first division’s opening round of the Incredible Finale stake series for ICF 2-year-old pacing colts and geldings with a scheduled 7:10 pm post time.

You’ll have to stick around another couple of hours to watch the second division of 10 state-bred youngsters slug it out because that split is slated as the seventh race with a 9:10 pm or thereabouts post.

With 6 of the 9 first divisions starters making their pari-mutuel debut tonight and all but John Barnard’s Heza Real Shooter doing the same in the second split, there is obviously a lot of uncertainty as to which freshmen will get bet down and which won’t.

Also, just how will these “green” colt and gelding pacers react to the sound of racing fans on the apron, the water truck, the track’s grader, and perhaps some other possible first-time distractions. 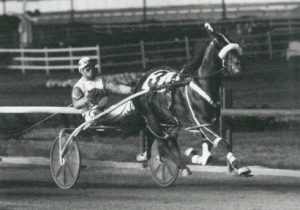 One of the second division pre-race favorites Ricky The Flash, driven by his trainer Freddie Patton Jr., does have the advantage of a winning start on the Martinsville Fair Track. Note that his time of 2:02 flat was on a half-mile track termed “good” four days ago.

Molina (Kyle Husted), the outside 10-horse in the second division got my attention despite his obvious bad post. The Sagebrush colt drew off in his 1:58 Hawthorne qualifier, finishing six-plus lengths ahead of Heza Real Shooter in it. Molina hails from the Herman Wheeler Stable and the barn is off to an excellent start at the meeting, hitting at a 25 per cent winning clip (7 for 28) heading into this week.

The fastest winning qualifier among the first division starts belongs to the Tom Simmons Stable’s Beach Shootingstar (Mike Oosting) with his 1:57.2 mile at Springfield nine days ago.

A solid second to Beach Shootingstar in that June 15 qualifier was Tripoli Stable’s Mykonos (pp 4, Casey Leonard), the younger brother of Zone Blitz, another Tom Simmons trainee. Mykonos was named after the Greek island, a popular vacation spot in the Aegean Sea.

Another first split freshman who won his qualifier is Dandy’s Phoenix (pp 2, Kyle Husted). Don’t be deceived by that colt’s slower 2:00 time. The No. 3 horse Sagebrush Sharp (Jamaica Patton) cut modest fractions of 30.4, 30.3 and 30 flat before giving way to Dandy’s Phoenix in the late going.

The Rob Rittof trained Dandy’s Phoenix is a Sportsmaster colt out of the broodmare C Suzabelle, making him a full brother to Dandy’s Diva and her first foal, Kelly’s Keepsake, (1:51.1, $587.391), the 2007 Filly Orange and Blue and American National Filly Pace champion at Balmoral for trainer Erv Miller.

Also looking to come away with the winner’s share of the $12,000 first division pot is Not Me Gram (Ridge Warren), Sagebrush Jim (Matt Avenatti) Safari Sage (Kyle Wilfong), Smokin Eyes (Gary Rath), and Shooting Straight (Bob Smolin). The last three youngsters each have a pari-mutuel start at Hawthorne on their résumé. 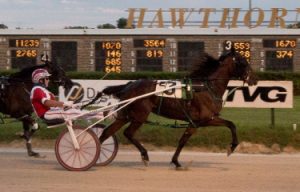 Rollin Coal ($8.40) spent the middle quarters of her race in the pocket behind the 2-1 favorite Sheincrediblenasty (Kyle Husted). When Leonard pulled her coming out of the last turn the Sportsmaster filly responded, coming on strong to post a one and one-quarter length victory in 1:57.2 in her pari-mutuel debut for her Chicago owner and trainer Hosea Williams.
The Herman Wheeler Stable’s Fox Valley Jazzy was hammered down to 1 to 9 odds in her Incredible Tillie split. Shelby Rae (pp 1, Gary Rath) made the winning Yankee Skyscaper filly work a bit to get to the front right before the first quarter (31.1) and then settled in behind her for a two-hole trip.

Fox Valley Jazzy went to the half and the three-quarter poles in moderate times of 1:01.3 and 1:30.2 with Shelby Rae looming dangerously right behind her. The two fillies then dueled down the lane with Fox Valley Jazzy ($2.10) digging in when it counted to gain a half-length triumph in 1:57.4.

Hot Rod Dylan ($4.80) was given a great trip by his driver Mike Oosting and took advantage of it by taking the $15,000 Open Pace Handicap in 1:51.3. It was the Nelson Willis trained gelding’s fourth win at Hawthorne in five starts for Barrington Hills, Illinois owner Shirley Le Vin.

Rocken Camnation (Kyle Wilfong) rallied from sixth , some eight lengths off at the three-quarter pole, to be second with a quick 26.3 last panel, beaten by three-parts of a length.