Homepage
You are here: Home1 / Mike Paradise2 / Steady as She Goes for Fox Valley Exploit

There’s an old saying that “Consistency is the Key to Success.” It certainly is in horse racing and Kyle Husted’s Fox Valley Exploit is a great example of the idiom.

The now five-year-old ICF mare is making her 22nd start of the season, mostly against high level fillies and mares, and hasn’t missed a purse check. 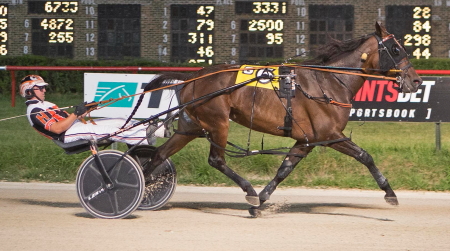 Fox Valley Exploit has been particularly tough on follow state-breds. She, and the Terry Leonard stable’s Fox Valley Gemini, are the only horses that are unbeaten with three or more starts in finals on Hawthorne’s Night of Champions.

This year the Amy Husted trained mare has a legitimate rival in the ICF aged mare pacing division in Scorecard Dandy. The Gregory Kain trained four-year-old defeated Fox Valley Exploit in the recent Maurello summer championship and figures to have a big shot tonight when the two talented distaff pacers square-off in the second race $12,500 Open.

Scorecard Dandy, a daughter of Sportsmaster out of the Artiscape mare Mahna Mahna, is having a career best season with $86,693 in her bank account with six wins on the year. She’s a cinch shortly to go over the $200,000 plateau in lifetime earnings for Illinois owners Green Acres LLC (Beecher) and Mike Klimas (Oak Lawn),

Speaking of earnings, Fox Valley Exploit has already banked over $93,000 this year for Michigander David Bingham and Kyle Husted of Altamont, Illinois and is nearing the $400,000 mark in purse earnings in just three and one-half seasons of racing.

After Hawthorne’s winter meet Husted sent his prize mare to The Meadowlands to see what she could do against some stiff competition and the mare didn’t disappoint him. She made 10 starts against some very good older female pacers and put $35,875 on her card, an average of $3,875 per start. 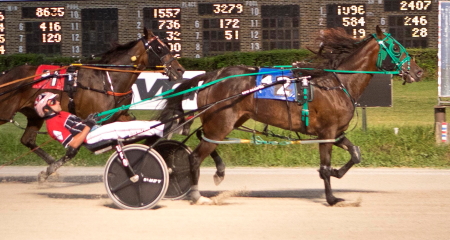 The ultra-consistent mare has been racing on or close to the front at the meet so drawing the two-slot in a five-horse field should bode well for Fox Valley Exploit, the likely post time favorite.

The Queen Rules: Illinois trotting queen Annas Lucky Star, nicely handled by driver Kyle Wilfong, continued her winning ways in last night’s $12,300 Open and the eight-year-old state-bred mare did by equaling her own track record with a 1:53.3 clocking.

Annas Lucky Star ($10.80) overtook the pacesetting Talk About Valor (Travis Seekman) in deep stretch and won by one length after a ground-saving up-close journey.

Wilfong hustled out the 4-1 third choice from the five hole and got a quick lead but the 1 to 2 favorite Big City Pearl (Atlee Bender) and Talk About Valor (7-2) were also on the move early from their assigned six and seven slots.

Big City Pearl got command at the 28.4 first quarter but Talk About Valor zipped by mid-way on the backstretch and took over the lead as Big City Pearl settled into second.

However, the Erv Miller east coast invader went off-stride before the 57 half and Anna Lucky Star moved into the two-hole. She stayed there until the stretch drive, besting Talk About Valor in the late going for Salem, Illinois owner Danny Graham for her 52nd career victory.