Few of us saw a sub 1:50 mile coming in a $6,500 Topline event at Springfield but no one, including the pace-setting Tookadiveoffdipper’s trainer Mike Brink, had any idea a bruising 25.2 first quarter would be in the works.

“No, I didn’t expect a 25.2 quarter by my horse,” said Brink. “I wanted (Mike) Oosting to get him to the top because the horse’s owners were watching him for the first time, but Mike told me after the race he got the horse fired-up before the start to get him out of there, but then he couldn’t hold him.”

Tookadiveoffdipper went on cut additional fractions of 27.4 (53.1 to the half) and 28.3 (1:21.4 at the three-quarters) before the pocket horse Aimo Hanover (Casey Leonard), rallied past in 27 flat for that 5-year-old’s fastest lifetime mile.

The two possible favorites got to tonight’s Open in much different manners. 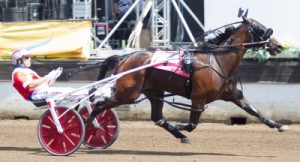 Aimo Hanover campaigned for the Ron Burke Stable as a 3-year-old and as a 4-year-old until mid-August of 2016. He hauled in over $100,000 in that time frame before the Pennsylvania bred pacer was purchased by his current owner Clinard Properties of Mt. Sterling, Illinois.

After a start at Hoosier Park, Aimo Hanover came to Hawthorne and had a second and a first in Open paces, before finishing his season with several in Indiana. 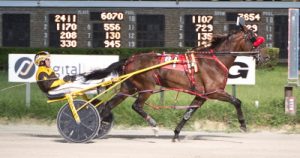 Meanwhile, Tookadiveoffdipper, owned and bred by Van Otterloo Stables of Rock Valley, Iowa, never participated for more than a $6,000 purse in his 11 freshman outings.

While Aimo Hanover has competed at tracks like The Meadowlands, Yonkers, Scioto, The Meadows and Hoosier Park, Tookadiveoffdipper did his thing in Iowa registered events at such places as Humboldt, What Cheer and Sioux Center, while earning under $20,000.

Tookadiveofdipper was acquired by Brink in mid-April of this year. After the horse had two Springfield qualifiers of 1:55.3 and 1:54.2, winning those by an average of 13 lengths, it was evident the horse was ready to make his pari-mutuel debut.

In it Tookadiveoffdipper raced wide throughout his June 23rd mile and ended-up with a second place finish. Brink then turned the driver chores over to Mike Oosting. The pacer, a son of Always A Virgin out of the Van Otterloo’s broodmare Onceinabluemoon, went on to rattle off seven consecutive victories, including a sweep of a Hoosier Park Series and its $22,635 final prior to his loss at Springfield.

Currently owned by the quartet of Mark Cross (Knoxville, TN.), Jane Cross (Olney, IL.), James Hepp (Steeleville, IL.) and Brink, Tookadiveoffdipper has a little over $37,000 on his season card going into his first try in a Hawthorne Open.

Post 2 through 4 will be manned by Cole Heat (Ridge Warren), Sunset Dreamer (Cliff Bell) and Hash-Tag Swag (Tim Curtin), who is gunning for his fourth straight, his latest triumph arising in a $22,625 Series Final at Hoosier Park.

Trashytonguetalker (Jim Lackey), Extravagant Art (Matt Krueger) and Mystical Walter (Casey Leonard), leave from posts 6, 7 and 8, in that order. A second place finish in 3 of his last 5 starts, all in an Open I at Hawthorne, secured Coal Hanover the outside nine-hole.

Enter for Du Quoin Saturday: Entries for the Tuesday, August 29th first racing program at the Du Quoin State Fair, are due by 10 am tomorrow (Saturday morning.). Trainers are encouraged to use online entering for Du Quoin. Phone entries will be accepted at Hawthorne (708-780-3690.).

The Tuesday card is headed up by the $31,000 Shawnee Trot for 2-year-old fillies and the Director’s Award for freshman filly pacers. The 3-year-old $27,000 stakes on Tuesday are the Time Dancer for filly pacers, the Windy Skeeter for filly trotters, and the Pronto Don for trotting colts and geldings.

A $200 entry fee is required for each ICF stake.