Homepage
You are here: Home1 / Mike Paradise2 / Sunday’s Feature is a Head Scratcher

Sunday night’s Hawthorne feature Open II Trot can be best described as a “head scratcher.” And that’s not a bad thing. Actually it’s a good thing since this headliner delivers not only a large field but a very competitive one to wager on.

There’s not even remotely a clear cut favorite and with recent Open I winners Skyway Jaylo and Banker Volo not invited to the eighth race field, you could make a case for a lot of different trotters to grab the winner’s share of a $7,200 purse. 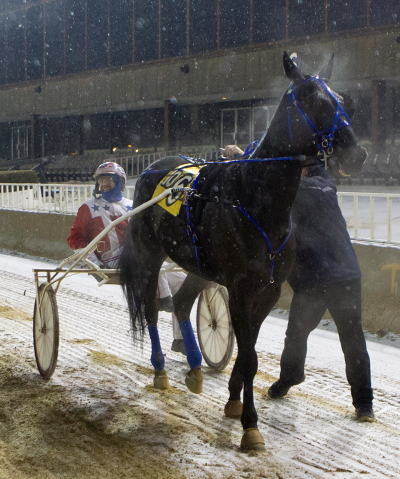 Also dropping out of Hawthorne’s top level trot is the third group comprised of All About Cowboys (pp 6,Juan Franco) and Madwell Hanover (pp 7, Sam Widger), both very capable trotters however neither one could stay flat a week ago.

The final sorting of posts (8, 9 and 10) has Primed N Powerful (Ryan Anderson), Schwarber (Tim Curtin) and Swan Handicap (Brandon Bates). The latter has the speed to overcome the post but can he carry it all the way? He didn’t last week, going from first to worse in the stretch, On the other hand the 5-year-old Indiana bred gelding gave way only to the winner in the January 7th Open Trot.

Meanwhile both Primed N Powerful and Schwarber had strong efforts and finished second and third, respectively, behind Skyway Jaylo. Schwarber does his best racing in the late going. Primed N Powerful, who in the past was usually on or close to the front, has rallied off the pace sharply since Ryan took over his lines two races ago.

The 5-year-old ICF gelding Primed N Powerful, a 28-time career winner now racing out of the barn of Jamaica Patton, is the soft 7-2 favorite in my line.

Hawthorne’s computer generated line has the race even more of a toss-up. It made the outside trotter Swan Handicap the program favorite at a rare 5-1 top choice. No horse it has listed is at higher than 10-1.

A Rockin Start: Co-owner Jared Finn steered Rockin Racer, the fifth betting choice in the eight-horse field of fillies and mares, to an impressive victory by almost five lengths in Saturday’s opener, the $10,000 Open Pace.

Rockin Racer ($17.60), a 4-year-old Indiana bred trained by Heather Stell, made a bold move on the backside and took command from Backwoods Barbie right before the 56.4 half and proceeded to draw away in the lane with her 1:52.4 clocking.

Mystical Nectar won the battle for second over the even-money favorite Rocking Katie.

Rockin Racer’s win was her second in a row at the meet for owners Jared Finn of Newton, IL and the Hinshaw Homestead Farms of West Des Plaines, Iowa.

Susie Triumphs: The first of a trio of consecutive Late Closer Series Finals came in race, the #7 event for fillies and mares saw the prohibited 1 to 5 favorite prevail for driver Todd Warren in 1:54.4.

Warren used a first quarter mile move (28 flat) to take Susie’s Soul to the front and the Jason Miller trained mare was never headed. The mile time of 1:54.3 was a career mark for the 4-year-old Indiana bred who finished three lengths ahead of Pennsyfromheaven. Princess Oshie rallied for third.

Series Sweep: Rockin Praline (Sam Widger) completed her sweep of the Late Closer #8 Series in front-end fashion and just as last week the Tom Simmons trainee was all out to hold off Beautiful Brew (Pat Curtin). The pair covered the mile in 1:56.3.

The winner’s share of the $17,000 Final boosted the 4-year-old mare’s earnings for the January to $15,800 for owner Red Barn Stable of Morrison, Illinois.

Pouring It On: The Terry Leonard Stable’s November Rain (Casey Leonard) poured it on in the lane and pulled away to a three length victory in the $25,000 Tim Wilson Late Closer Final strictly for ICF pacers.

C Far (Gary Rath), winner of the first legs of the series, was bottled up throughout the 1:56.4 mile before shaking loose in the late going to take the bridesmaid honors. The 60-1 longshot Lacarmeliliana (Matt Avenatti) raced well to be third,

November Rain ($4.60) came out of third soon after the first quarter and powered her way to the front and that turned out to be the winning move for the 4-year-old I Can Only Imagine mare owned by Illinoisans Peter Kouchis (Palos Hills), Dandy Farms Inc. (Glenview) and trainer Terry Leonard (Harvard).

Can C Far “Trip” Her Way to Another Victory? 2018 Hawthorne Stakes Schedule
Scroll to top