Homepage
You are here: Home1 / Mike Paradise2 / That’s All Folks!

It doesn’t seem that long ago that Hawthorne’s summer harness racing meet got under way and the start of summer was still on the on the horizon.

Sadly summer officially came to an end last Friday and even more sadly for those of us in the Illinois Standardbred history tonight is the final evening of racing on the Chicago circuit eight long months.

They’ll be coming down the Hawthorne stretch tonight for the last time of year. (Four Footed Fotos)

With Hawthorne deciding it didn’t want a winter harness meet in 2019, and with no other all-weather Illinois horse racing track now available to conduct pari-mutuel meeting, it won’t be until the first week of next May that harness horsemen will be back to try and eke out a living in a state woefully in debt and with residents leaving year after year by the tens of thousands.

It wasn’t that many past years when harness racing in Illinois was a nightly happening with over 360 nights of racing a year. However in 2019 the number of racing opportunities for Illinois horsemen has now dropped down to an unsightly 71 racing days. That’s 41 racing nights less than 2018 and that was only a sparse 112 dates.

The lack of a winter meet next year chopped off 27 dates off the harness racing calendar. The other 14 days were clipped when Hawthorne’s request to race only three nights a week (Friday, Saturday and Sunday) from May 3 through June 15, and those same three nights the entire month of August, was approved by the Illinois Racing Board.

The four day a week format with Thursdays added to the schedule will be from June 16 through July 31 with the exception of being dark on Thursday July 4, and from September 1st through the 22nd, the last night of the 2019 meeting.

With last Saturday’s much anticipated Night of Champions in the rear view mirror and after six ICF stake Consolations and an Open Pace were contested last night, the meet will end this Monday evening with a whimper. It’s a nine-race card with every wagering event offering a sub $6,000 pot. 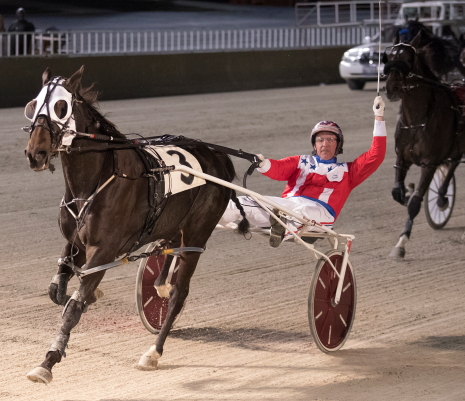 Sunday’s Recap: The last Sunday card of the meeting saw six ICF consolation stake events worth $18,750 each contested for either 2 or 3-year-olds.

The Fox Valley Flan Consolation for 2-year-old filly trotters turned out to be an easy win for Ivanka ($8.60), driven by Travis Seekman for trainer Angela Coleman. The Cassis filly drew off by four lengths in the 2:00.2 mile.

Next up was the first of a pair of Incredible Tillie consolation divisions for freshman filly pacers.

Despite coming off a victory in her last start at Hoosier Park Queens Of Tens (Kyle Husted) was overlooked by the betting pubic and popped 30-1 odds. Trained by Jace Sundeen Queens Of Tens won rather easily by 3 and 1/2 lengths in her first season best time of 1:53.4 and paid a healthy $64.80.

Hammered down to 1 to 5 odds in the second Incredible Tillie consolation Lilly Von Shtupp ($2.40) didn’t disappoint her many supporters. Jim Pantaleano guided the Nelson Willis freshman trained filly to nearly a two-length triumph with a season best time of 1:56.3 for the Megan Rogers Stable of Chicago.

The first division of the Incredible Finale consolation was strictly no contest as the 1-2 favorite Sporty McGrew ($3.00) stayed in the pocket through the first three quarters if the mile before being popped out by driver Kyle Wilfong. The Rick Schrock trained freshman proceeded to pull away and dominated by almost 10 lengths with his 1:57.2 mile.

Sheriff Coffey (Ridge Warren), from the barn of trainer Shaw Nessa, came thundering down the stretch and won the Robert F. Carey Jr. Memorial 3-year-old colt consolation by two and one-half lengths in 1:53.2 while Juan Franco rallied Fox Valley Catwalk to a half-length win in the Plum Peachy consolation for second season pacing fillies. The Rodney Freese trained winner covered the mile in 1:55.3.