Homepage
You are here: Home1 / Mike Paradise2 / “The Dygert’s” are Sunday’s Main Attractions

Hawthorne is trotting out a longer than usual Sunday card tonight headed-up by the first round of Night of Champions sophomore diagonally gaited ICF three-year-olds and a good betting Open handicap trot.

The Erwin F. Dygert Memorial events come early, races two and three on the 13-event program, came up with 12 colts or geldings entered making necessary for the series’ first leg to be split into two $12,500 divisions with six horses each.

The trotter coming into the race with the best credentials is Dennis Garner’s Shady Maple Spirit (Ridge Warren) with over $36,000 banked as a freshman. Most of that amount came early in his two-year-old season with a victory in a division of the Cardinal and second place finishes in the first two legs of the Kadabra,

With a season start under his belt and a significant post change tonight, from the 10-hole to the pole position, Shady Maple Spirit looks like a major contender,

The second Erwin Dygert division brings out the 2020 ICF Colt Trotter of the Year Fistfullofdollars (pp 1, Todd Warren) who put over $70,000 on his freshman card with the bulk of it coming with his victory in the $118,000 Kadabra final on the Night of Champions.

According to track’s morning line, favoritism should go to the Steve Searle trained Rndmnunpredictable who had a good tighter last week with tonight’s driver Casey Leonard. The Flacco Family Farms homebred won a pair of starts in his juvenile campaign but went off stride at the start of the Kadabra championship. 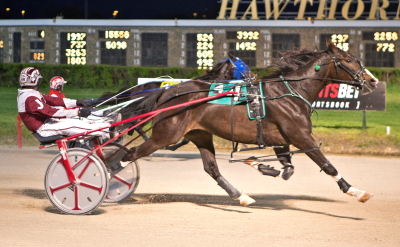 Solid Open Trot: The fourth race Open Trot follows, and it was handicapped by groups with Talk About Valor (Travis Seekman) allocated the pole position. Posts two through five were drawn with Cashit It (Kyle Husted) getting the two, to his left are Louscardamon (Cornadous Stewart), the Australian bred Needabacardi A (Casey Leonard), and Walter White (Ridge Warren). The six was assigned to Never Say Uncle (Kyle Wilfong).

Pine Dream’s three race winning streak was snapped a week ago by Lousraptor but it wasn’t for lack of effort. The often front-stepping Merv Chupp trainee went off stride going to gate as the 3-2 choice, fell behind about eight lengths to last, and still came on to be second best.

The Steve Searle trained Lousraptor came flying down the middle of the stretch to make it four victories in a row in 1:54 flat, a new mark for the five-year-old Flacco Family Farms home bred.

Hart’s Heart was one of four winning drives on the card for Kyle Wilfong who also guided the Donna Holt Rock It Out ($9.40) to her win in the $12,000 Open Pace for filly and mare pacers earlier Saturday night.

Hart’s Heart, trained by Mike Brink for Illinois owners and breeders Donna Crebs and Judy Conzo, was floated out and eventually took over the lead on backside after a modest 29.4 opening quarter and won in 1:54.4.

Meanwhile Scorecard Dandy, saddled with the nine-holt in an 11-horse field was parked-out every step of the in a very game effort for trainer Gregory Kain.