Homepage
You are here: Home1 / Mike Paradise2 / The Heat Is On

By Mike Paradise
To borrow the title from one of my favorite songs of the mid-1980’s “The Heat Is On.”
In this case it’s happening both on and off the Hawthorne racetrack.
Sultry, and at times roasting weather has become the norm in the Chicago area and for some owners of ICF 3-year-olds trotters and pacers, they are sweating even more for a big performance from their horses that would vault them into a starting berth of Tournament of Champions Night on Saturday, September 10.
Its leg three this week for both the sophomore trotters and pacers, so time is indeed running out to make a championship appearance.
Thursday night the 3-year-old state-bred trotters will slug it out in a pair of divisions of the Dygert, the Erwin for “the boys” and the Beulah for “the gals.”
They’ll go in back-to-back races, the sixth and seventh, with the colts and geldings going first. The filly Dygert will have a bulky 11-horse field with the two likely favorites Surviver DI and Vengeful leaving from the favorable one and two posts, in that order,
On Friday the Plum Peachy stake series for sophomore filly pacers is on tap with a single 11-horse division. Recent Violet champ Char N Marg sits on top the Plum Peach Standings with 100 points after victories in the first and second legs for Quaid Racing of Chicago.
Saturday night the state-bred second season pacing colts and geldings will take over the spotlight. The first two legs were split into two divisions each and a different pacer prevailed in each: Holdonwe’rerolling and Caffeine Kid in the first and Royale Rose and IYQ YQR in the second. 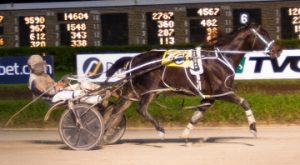 Securing the Top Spots: The 5-year-old mare Seeyouatthefinish and the 10-year-old horse Mr. Coolie have fortified the top spot in their respective divisions after convincing victories last Sunday.
Seeyouatthefinish (Kyle Husted) 1:54.1 mile on a “good” track was her seventh in 14 season outings for Deb and Bernie Paul of Salem, Illinois. Three of those triumphs have come in the track’s Opens and another in a $17,600 Late Closer Series Final back on May 20.
Mr. Coolie (1:54.1) teamed-up with driver Sam Widger Sunday evening for the veteran pacer’s third consecutive Open Pace for trainer John Zawistowski and owner Wolf Creek Farm of Naperville, Illinois.
In his last two Open wins Mr. Coolie has overcome the handicapped 10-hole and he had the 7-slot in a 9-horse field in the first of his three first place finishes in July.
http://harnessillinois.com/wp-content/uploads/2021/03/ihha_logo_white_wtext_v2-300x130.png 0 0 Mike Paradise http://harnessillinois.com/wp-content/uploads/2021/03/ihha_logo_white_wtext_v2-300x130.png Mike Paradise2016-07-27 12:52:332016-07-27 12:52:33The Heat Is On