Homepage
You are here: Home1 / Mike Paradise2 / The Heat Is On

Maybe it was only fitting that on the hottest night of the year at Hawthorne it was the aptly named ICF gelding Cole Heat who pulled off a huge upset in Saturday’s $10,000 Open Pace at odds of 44-1.

Patiently driven by Ridge Warren Cole Heat came from last to first and eked out a head decision over the 4-5 favorite Kolt Power (Casey Leonard) with a sizzling 26.1 last quarter. 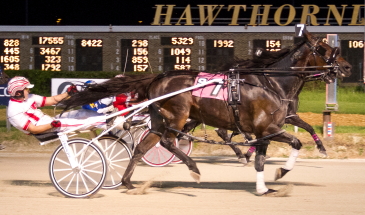 Somestarsomewhere (Dale Hiteman) shook loose late and was beaten only a half-length in the 1:51.4 mile.

Royale Rose (pp 1), Somestarsomewhere (pp 8) and Kolt Power (pp9) were among a slew of pacers shooting out from the gate and by the time they came out of the first turn they settled-in 1, 2 and 3, in that order.

Soon after Royale Rose (Matt Kruger) took the field top a 26.1 first quarter, Casey had Kolt Power on the move out of third and had a narrow lead before the 56.1 half. Meanwhile Cole Hert was shuffled to ninth and last, some nine lengths off the leader and looking like a non-factor.

Ridge Warren got the son of Cole Heat on the move in the final turn and the state=bred geldmbg had plenty of pace but was still seventh at the top of the lane. Kolt Power went by the 3/4 pole in 1:24.2 while Somestarsomewhere (Dale Hiteman) was looking for racing room.

Cole Heat came flying in the middle of the track and made up almost eight lengths in the last quarter to gain a head decision for his second season victory for trainer Ray Hanna of Altamont, Illinois, The son of Cole Muffler is owned by Hugh Lake Lacey of Joplin, Missouri.

When the 11-race Hawthorne card got under way the temperature was a sultry 90 degrees. Obviously, Cole Heat didn’t mind the heat and probably those holding a $90 winning ticket on the 8-year-old gelding didn’t either.