The focus on Illinois harness racing turns Friday to Springfield, where six of the eight Illinois State Colt Fair- Colt Stakes eliminations or preps will be conducted. Post time every race day at Springfield will be 12 noon.

All four of the 2-year-old ICF stake eliminations for both sexes and gaits will go on Friday with the 3-year-old colt and filly pace elims on tap Saturday afternoon.

One of the major surprises in the second season state-bred filly pacers has been Bet-More Stable’s The Sis Master who has blossomed into one of the division’s top-notch fillies as a 3-year-old for driver, trainer and co-owner Michele Morgan.

As a 2-year-old The Sis Master went winless in 13 trips postward and made a modest $12,185 for her owners Wright City, Missouri owners. The Sportsmaster filly went unplaced in the Violet, out of the money in 3 of her 4 Incredible Tillie outings, and again in the final on the Night of Champions.

The Sis Master also had, shall we say, a bit of an attitude problem.

Some of the drivers who drove her last year told us: “Don’t put me back on your filly,” said Michele. 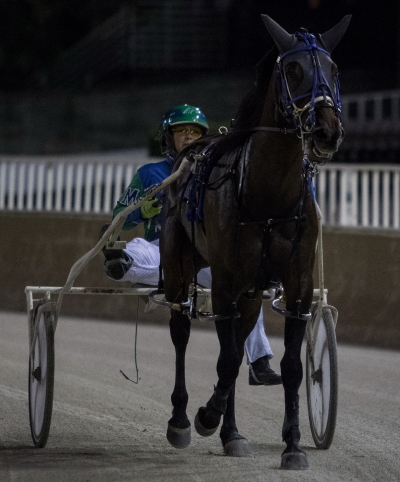 The Sis Master, trained by her driver Michele Morgan), has her sights set on another victory at Springfield Saturday’. (Four Footed Fotos).

Altogether, that hardly sounds a ringing for endorsement for the filly’s 3-year-old season. However, this year it’s been a whole different story for The Sis Master. She sits on top of the Plum Peachy standings with 100 series points, earned by victories in the second and third legs of the stake for ICF 3-year-old fillies and she’s looked very good doing it.

“I didn’t have The Sister Master last year,” said Michele. “Shawn Nessa broke her and was her trainer. She wasn’t very mature but sometimes that can change between a horse’s 2 and 3-year-old season and it did for her.  I’ve brought her along very slowly and tried to be very patient with her. She is getting better with every race. She’s a very sound horse but mentally it’s been a learning process. Also, the filly doesn’t like to lose.”

Lately, the first foal of the Incredible Finale broodmare AR Sissy hasn’t been doing a lot of losing. The Sis Master has won 3 of her last 4 Hawthorne starts, all with Michele at her lines, and all came with up-close trips.

“She likes to motor out of there,” said Michele, a St. Charles, Missouri native who resides in Godfrey, Illinois.  We skipped the first leg of the Plum Peachy because she wasn’t ready yet. I own the filly with my brother (Ray Morgan) and my sister (Janet Betley) and over the winter we mapped out plans for the filly for this year.  We pointed her for the middle Plum Peachy legs and then Springfield. I’ve been very careful with her and she has responded very well. I didn’t want to rush her to get her ready for Hawthorne and I didn’t want to over race her either. I have to say so far, so good,” said Michele who is a part-time Standardbred trainer.

“I’m a registered nurse,” said Michele. “Back in the 80’s I realized I wasn’t going to be able to make a living just training horses, so I went back to school in Missouri to become a nurse.”

The “cautiously optimistic” trainer will be in the bike Saturday afternoon, when The Sis Master goes to the gate in a single $6,000 elimination to see who will advance to next week’s Springfield championship.

The bad news for Michele and her fellow sibling owners is that the filly drew the outside nine-hole in an 11-horse field with two trailers. The good news is that The Sister Master only needs to finish ahead of one foe to gain the $25,000 Final where maybe Lady Luck will be more favorable to her in the draw for posts.