Homepage
You are here: Home1 / Mike Paradise2 / There is No Place Like Home

The expression “There’s “No Place Like Home” just doesn’t apply to people. Those of us who are dog or cat owners know the term also applies to our pets.

And the same can be said for some horses and a prime example is the ICF mare Phyllis Jean, who pulled off a remarkable winning 1:53 flat mile in last week’s $10,000 Open Pace for fillies and mares. 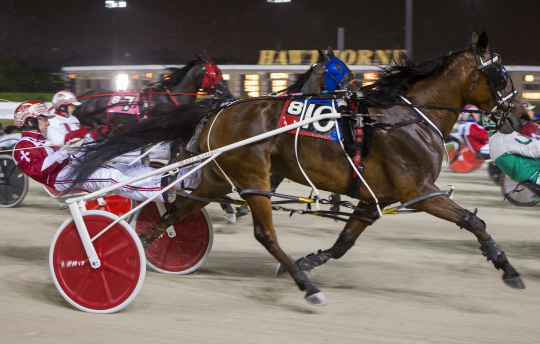 The Kim Roth Stable’s Phyllis Jean (No. 10, Matt Krueger), is shown powering her way in the lane last Saturday in route to an upset victory in the $10,000 Open Pace for filly and mares. (Four Footed Fotos)

The 15-1 longshot left from the outside 10-hole and had a wide journey with driver Matt Krueger and still proved best, much to the delight of trainer Kim Roth for her Berwyn, Illinois owner Al Beals.

“Not only did she have a lot of ground to make up but she never saw the rail,” said Kim. “She was parked the whole mile. Matt left with her, but he never was able to get a spot to drop her inside, so he had to race Phyllis Jean outside the entire mile”.

Phyllis Jean was parked out eighth, some 12 lengths off the leader at the first quarter and remained eighth, seven-plus lengths behind at the 56 half. With the outer flow stalling, the ICF mare was still a half-dozen lengths behind in seventh, at the three-quarters when Krueger swung her to the outside and the 5-yeaer-old mare started to gobble up ground.

In the last eighth of the mile, Phyllis Jean went from fifth to first and bested Narcian Jewel by a half-length. It was the Roth trainee’s third local victory in five outings at the Hawthorne summer meeting.

Phyllis Jean raced at The Meadowlands and Yonkers for the first four months this year for much bigger purses than offered at Hawthorne. But with those superior pots came stronger competition and the ICF mare made a modest $7,000 in nine starts out east.

In her first five Hawthorne summer starts, she has already banked $16,554 for Beals and her career earnings have climbed to $131,031.

Phyllis Jean made over $85,000 as a 4-year-old, with the vast majority of her 42 starts in 2017 coming at east coast tracks. However, when it comes to winning races, there’s no place like home for the mare. Eleven of her lifetime victories have come in Illinois. 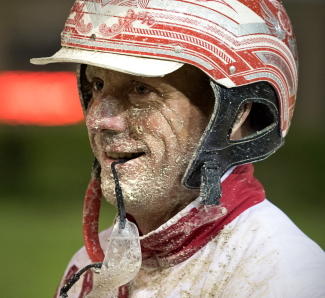 I asked her trainer why she thought Phyllis Jean does so well at Hawthorne, “I think a lot of her success here is because she likes a mile track and she likes the surface of Hawthorne’s track,” answered Kim. “Out east they have a lot of different surfaces and at some track you can’t race a horse with borium like you can in Illinois. She can get a hold of the track better here.”

“Also, I think Phyllis Jean is just happier here. She was very frisky in the paddock and she was super warming up. I knew she would be good the other night but I also thought too bad we have the 10-hole.”

That didn’t keep the daughter of Henry Clay out of the Artsplace dam, Art On My Mind, from rewarding her supporters with a $33.20 winning payoff.

It ended up as a win-win weekend for Roth, Phyllis Jean’s Open Pace upset on Saturday was followed on Sunday with her stable-mate New Queen (Casey Leonard), capturing the $23,500 Violet stake for 3-year-old ICF trotting fillies, beating the likes of Good Design, Trotting Grace and Lou’s Silver Star for her New Jersey owner Peter Kleinhans.

New Queen was a non-factor in her first three starts in the Weiss Trotting Series at Pocono Downs. The filly returned Illinois for the upcoming summer’s 3-year-old state-bred stakes. After a needed start two weeks ago, the New Balance filly came from sixth and last and powered (28.3), her way to a 1:57.3 mile at 6-1 odds.