One thing you gotta love about horse racing is that you just never know what’s going to happen once the starting car draws away.

A lot of us, and that includes your author, saw last week’s Open Pace as another renewal of our Battle of the Titans, strictly a two-horse race between He’zzz A Wise Sky vs. Fox Valley Gemini.

After all, in the first seven Open’s at the Hawthorne meet, one or the other Illinois bred pacing star came out on top—four went to He’zzz A Wise Sky and three to “Gemini.”

Why would this Open be any different?

Well, it turned out that the outcome was indeed quite different. 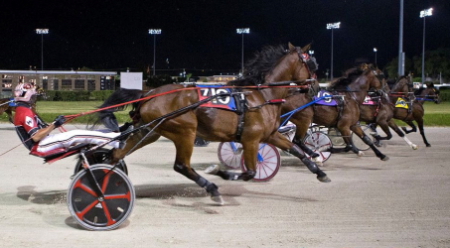 They’ll be off and racing this weekend at Hawthorne, Friday’s 10-race card is headed up by the $12,000 Open Pace. (Four Footed Fotos)

He’zzz A Wise Sky (Kyle Wilfong) finished third and Fox Valley Gemini (Casey Leonard) could do no better than fourth in it as Lying In Cash (Kyle Husted) and Bobcat Bay (Ridge Warren) came on to be the one-two finishers at the end of a quick 1:50 mile.

Both horses were used hard in the early going by their respective drivers, no doubt with hopes of a pocket trip behind the speedy and very likely pacesetter He’zzz A Wise Sky.

No less than five horses shot away from the start and it was Lying In Cash going the fastest, getting command in the first turn with Bobcat Bay right behind him.

As expected, He’zzz A Wise Sky left in a hurry from the eight slot and while the pacer eventually got to the front the quick 26.3 first quarter, as it turned out, “stung” the John Filomeno trainer pacer enough that the horse tired a bit in the late going.

The Michigan based pacer Lying In Cash came into the race with a victory at 11-1 odds competing at a much lower level conditioned pace (non-winners of $3,011 in his last four starts), and therefore many of us thought “the horse is in too tough.”

A week ago, Lying In Cash was at his best so give credit to the five-year-old pacer’s trainer Scott Galloway, who had the horse in tip-top shape and ready to roll.

Also give praise to driver Kyle Husted, who carved out the kind of trip Lying On Cash needed to handle the class hike so he pacer could “take down the Titans.”

And, of course, pay tribute to the Michigan homebred pacer who showed in the lane he “wanted it” and proceeded to “deliver it” by speeding to a new lifetime mark, of 1:50 flat for owner and breeder Techia Lochmann of Kalamazoo, Michigan.

On the Short End: Tonight the $12,000 Open returns and the strategy by some drivers may change because there are only five horses going postward.

Last week’s winner Lying In Cash is getting the week off. Meanwhile the speedball He’zzz A Wise Sky (Kyle Wilfong) leaves from the four-slot and not the eight, while his chief rival Fox Valley Gemini (Casey Leonard) goes from the nine post to the five.

The first three inside positions belong to Fox Valley Ren (Juan Franco), Yankee Bounty (Travis Seekman) and Bobcat Bay (Ridge Warren), in that order. Expect the latter to shoot out and push He’zzz A Wise Sky in the early going however a 26.3 first panel is unlikely with a field about half the size of last Friday’s.

Will Casey send out Fox Valley Gemini out or take him back? We won’t have to wait long to find out. Friday’s feature is the second race.