Homepage
You are here: Home1 / Mike Paradise2 / They’re Off Today at Du Quoin

The two-day harness racing meet at the Du Quoin State Fair gets under way this morning with five ICF champions for either 2 or 3-year-olds to be decided plus a couple of early non-wagering events to determine its state-bred aged trotter champions.

First post for the 10-race betting card is 11 am. You’ll have to show up earlier to watch six of the better ICF trotters, age four and up competing in non-betting events.

A three horse field of aged male trotters consisting of Picky Picky Valor, Dr. Spengler and Springfield champion Primed N Powerful vie for a $7,000 purse at 10 am for the colt and gelding showdown. About a half hour later slugging it out for the mare trotting crown are Fox Valley Elana, Lous Game N Match and Anna’s Lucky Star, the latter is looking for a sweep of both State Fair crown. 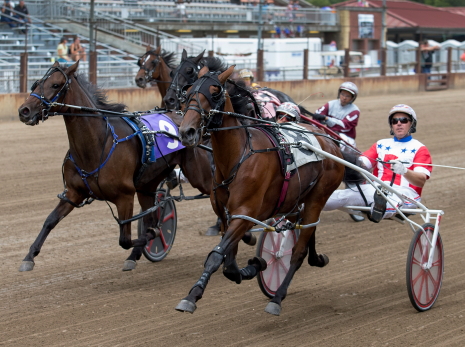 Fox Valley Halsey (pp 2, Casey Leonard) came up with her best effort in her first season of racing when she captured the Springfield in 1:53.2, a new career mark. She’s the 9-5 morning line favorite and deservedly so. The Sportsmaster filly is never been worse than third in eight lifetime starts for trainer Nelson Willis.

Brienne The Beauty (Travis Seekman) looked very good winning her first two career stars, including a leg of Hawthorne’s Incredible Tillie but disappointed at Springfield. Perhaps she had some health issues or maybe that all dirt racing surface didn’t suit her. If she’s right she’s a major threat.

Perch (Kyle Wilfong) is a filly that starts slow and finishes fast. She was too far back at Springfield when she closed in a big way for second. The Duneside Perch filly drew the outside eight-post and that is a concern. Fox Valley Little Kim is coming along nicely. A more favorable trip than she had at Springfield gives the filly a big shot with her new driver mike Oosting.

The two programs favorites, Louzotic (5-2, Mike Oosting) and Loussolataire (7-2, Kyle Husted), landed the outside 10 and 9 slots, respectively, maybe making this stake ripe for an upset winner.

Puddin Cheeks (John D Finn) had a big try at Springfield from the 9-slot and should relish the move to the four-post where she may seek command. Heidi High (Chares Arthur) is another who can get away from the gate in a hurry and Ivana (Casey Leonard) also showed gate speed at Springfield.

Louzotic was second best at Springfield but the winner Encantado not making the trip to Du Quoin, this Steve Searle trained filly rates as the trotter too beat despite her post. She has enough speed from the gate to maybe find an early hole.

No ICF filly trotter has been busier than Steve Renard’s Loussolataire. This is already her 26th first season trip to the gate and yes, she’s another who can leave well. While most of her wins have come at fair tracks, 14 trips to a winner’s circle certainly is impressive number. It’s the most for any freshman trotter in the country

It appears Allbeastnobeauty (Mike Oosting) has gotten good again at the right time for the Mike Brink stable. The Sportsmaster filly dug in nicely to take the Springfield championship and there’s leg of the Plum Peachy and its $85,000 (est) final on the horizon.

Allbeastnobeauty had a tough trip when she beat Fox Valley Jazzy by a neck at Springfield and that filly has skipped Du Quoin.

The third place Springfield finisher Rollin Coal is back for another try at the division leader and her five length defeat could be a bit deceiving. The Hosea Williams filly was taken back at the start and was never in position to contend. That should change this afternoon.

The Sis Master (Michele Morgan) figures to shoot out and likely will have command. Trained by her driver, the Sportsmaster raced subpar at Springfield but could be a lot better today. Skeeter Machine (Kyle Wilfong) has been best up close and she wasn’t there in either of her Springfield races.

With the drawn not going the way of the top three finishers of the Springfield Final there should be a lot of early action in this stake as drivers try to get their trotters in good position.

Springfield champ Trotting Grace (Kyle Husted) drew the outside eight-slot nevertheless she’s in peak form and the Cassis filly did breeze in both Springfield outings for trainer Steve Searle.

White Pants Fever (pp 6, Ridge Warren) was second best two weeks ago and while she hasn’t been able to beat her stable-mate Trotting Grace as a 3-yerar-old she is a threat to do so.

An outside post (pp 7,) is nothing new for Maui Mana and her driver Casey Leonard. They had the seven at Springfield and the eight in the last Dygert leg. The Mike Brink trainee left in her last two starts and likely will be sprinting out today. The daughter of Cassis is seeking career win No. 10 in 18 trips to the gate. 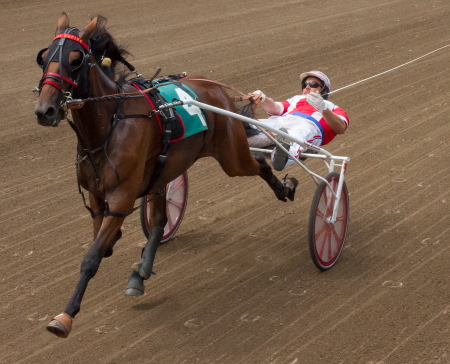 Casey Leonard was in a prone position with Illinimight at the finish of his Springfield championship. Next up for the Mike Brink trainee is today’s Pronto Don 3-year-old colt and gelding trotting stake at Du Quoin. (Four Footed Fotos)

Illinimight’s turnaround at Springfield along with today’s draw has made this an intriguing championship.

Big Lou (Kyle Wilfong) has shown he has the best late rush in the field but he did land the nine-hole and probably will have a lot of horses to try and pass up for trainer Curt Grummel. No surprise if he does just that today.

Springfield’s beaten favorite Majistic Caprice moves from the eight-post to the five for his new driver Tyler Shehan and that should bode well for the Malabar Aqua gelding. The Roshun Trigg trainee was parked out to a quick 27.3 first quarter at Springfield.

Don’t Ne Cheeky (Ronnie Gillespie) with the rail will see to it that Majistic Caprice doesn’t make the top with ease, Another Roshun Trigg starter, Don’t Be Cheeky went off stride in the lane at Springfield after a solid effort in his elimination.

Illinimight (Casey Leonard) came out on top in last year’s Incredible Finale Final and may be getting sharp when it counts the most. His 1:54.4 win at Springfield shows the Mike Brink trotter can be a major player in today’s Pronto Don and for another Night of Champions victory.

True Detective is a price shot to consider. This year’s Cardinal champion had the misfortune to draw the 10-slot in the second tier in both Springfield starts. The Lous Legacy gelding has been best up close and could motor out from the two-slot and race near the front today for trainer-driver Curt Grummel.