Homepage
You are here: Home1 / Mike Paradise2 / They’re Off Tonight at Hawthorne

Harness racing returns to Hawthorne tonight after a 12 week hiatus, with a 10-race card highlighted by the first legs of four Late Closer series races.

We won’t have to wait long for the first of the Late Closer events. The $8,500 Bea Farber for trotters without $30,000 in lifetime earnings ($45,000 for ICF horses or fillies or mares), goes as race two and its eight-horse field consists of seven state-bred trotters.

The lone non-Illinois bred in the Farber is the Wilfong family’s Bazaar Bazaar (Kyle Wilfong). The 5-2 morning line favorite has picked up almost $20,000 this season campaigning in Late Closer events at Miami Valley Raceway in Ohio and Indiana’s Hoosier Park. 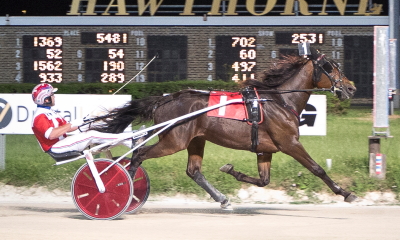 True Detective (3-1, Casey Leonard), from the Curt Grummel Stable heads up the Illinois contingent. The now 3-year-old gelding won 5 of his first 7 starts as a freshman, including the Cardinal Final and a trio of Kadabra stake series races. The gelding banked over $37,000 in his first season for his owner Dr. Patrick Graham of Pittsfield, Illinois.

The fourth race $8,000 Daryl Busse Trot, landed a boatload of first leg starters, 12 to be exact, so that means they’ll be 10 across with Mighty Oaks Mandy (Ryan Anderson) and Big Lou (Casey Leonard), the 5-2 first flash choice, in the second tier.

The Joel Smith Stable’s Dancing Devil, is making his career debut as a 3-year-old. The $55,000 yearling buy was unraced as a freshman. The Indiana bred is a brother to Swan Leader, a 20-time career winner with a mark of 1:54 and Fearless Man with gaudy numbers of 36 lifetime wins, earnings of $586,049 and a lifetime best mile of 1:52.1.

The $8,500 Walter Paisley and the $8,000 Dave Magee opening leg series paces go back-to-back as Friday’s seventh and eighth on the card. The Paisley is for fillies and mares with under $30,000 lifetime ($45,000 for ICF distaffers), heading into April 1st. 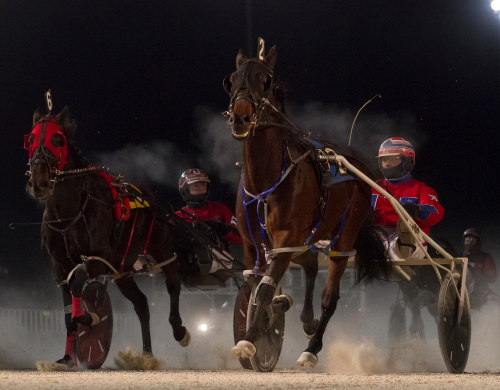 C Far (No. 2 inside), returns to the races in Friday’s Walter Paisley Late Closer Series. The 4-year-old ICF mare banked over $14,000 at Hawthorne’s winter meet for the Gary Rath Stable. (Four Footed Fotos)

Rodney Freese’s Fox Valley Catwalk, has rattled off five consecutive season victories and that includes a sweep of the Doc Walker Series and its $25,000 final. November Rain, trained by Terry Leonard, captured the $25,000 Late Closer for ICF fillies and mares while C Far, runner-up to November Rain in the finale, earlier took a pair of series legs for owners Gary and Kathryn Rath.

A Reminder: Tomorrow is Kentucky Derby Saturday and Hawthorne will have a special early 6:30 first post to take advantage of the larger crowds at its facility and the OTB’s watching the 144th edition of “The Run for the Roses” slated to go off at 5:50 pm.