Homepage
You are here: Home1 / Mike Paradise2 / They’ve Got a Good Thing Going

While the lyrics of the old Rolling Stones hit “We Got A Good Thing Going” don’t apply, the song title certainly does for the owners and trainers of the likely three favorites in Friday’s $13,350 Open Pace.

The Open posts were drawn by groups (1-5) (6-7) with the ten assigned to Let’s Drink On It, winner of the first two Opens raced this month at Hawthorne. 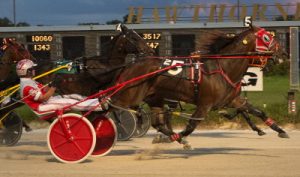 Let’s Drink On It has added another $25,620 to that total in just five Hawthorne outings, since the pacer made his initial Chicago circuit trip to the gate on June 30th. That’s an average of slightly over $5,000 per Hawthorne start.

A Bettors Risk, a 4-year-old son of Bettor’s Delight, has over $57,000 in season purse earnings with much of that coming in Pennsylvania for his Canadian owner Robert Hamather.

A Bettors Risk didn’t arrive locally until July, nevertheless, he has averaged $4,750 in earnings for trainer Payton Ode.   In his four local contests, the pacer has three first place finishes with a pair coming in Opens.

Coal Hanover, a 5-year-old son of Dragon’s Again, is competing at Hawthorne for a second straight year for trainer Jim Ellison. The pacer made eight starts on the mile track in 2016, all before last July, and picked-up a couple of victories.

With no winter meet this year at Hawthorne, Coal Hanover raced in Ohio and Indiana in 7 of his first 8 season outings without much success. The horse banked a little less than $7,000 in those out-of-state races before making Hawthorne his home base in May.

This year in 11 tries on the local scene Cole Hanover has recorded three wins and four seconds with the great majority of those races coming in Open Paces. The gelding has averaged almost $3,000 per start at Hawthorne.

Trashytonguetalker and Mystical Walter are both trained by Terry Leonard and they know their way to the Hawthorne’s winner’s circle. Trashytonguetalker has made four stops there at this meet and two came earlier in Open Paces. Mike Oosting will drive him for the first time tonight.

Stable-mate Mystical Walter has won twice this season at Hawthorne and while neither came in the Open, the 7-year-old ICF pacer did capture a pair of Hawthorne Opens in 2016.

As a 3-year-old Mystical Walter proved best in both the Springfield and Du Quoin State Fair stakes, as well as Balmoral’s $173,000 Langley Final on Super Night 2013 when he raced out of the Erv Miller Stable. His Illinois driver that year was Casey Leonard.

The secondary feature on Friday is the ninth and last race on the card, a $9,000 conditioned pace with the likely favorite Herman Wheeler’s Major Bliss (Bobby Smolin), from post six. The horse has won 8 of 10 stars in his first season of racing at the age of six and earlier this month captured a $25,000 Open at Scioto Downs in a quick time of 1:51 flat.

The Tom Simmons Stable’s Aimo Hanover was entered for the race but was scratched out by his trainer after his monstrous winning 1:49 flat mile Tuesday at Springfield. It would have been the gelding’s second start in three days. Instead Aimo Hanover got some much deserved time off.