Homepage
You are here: Home1 / Mike Paradise2 / This Captain Growing into a Solid ICF Pacer

As expected Saturday night’s third round of the Robert F. Carey Memorial series was split into two divisions. The stake events for ICF 3-year-old colts and geldings will go as races four and eight on Hawthorne’s 10-race program.

Eight sophomore pacers will take another shot at the division leader Fox Valley Nemitz who as earned his way to the top spot for his owners and breeders Fox Valley Standardbreds of Sherman, Illinois. The Nick Giberson trainee drew nicely with the two-slot for regular driver Casey Leonard and very likely will be the deserving overwhelming favorite.

Fox Valley Nemitz captured both of his first two Carey legs and n last start two weeks ago was a dominant winner of the Cardinal with a career fastest 1:51.1 mile.

On the other hand the second Carey division may not have a prohibitive favorite. Both Fox Valley Herbie (Mike Oosting) and Ima Skydancer (Kyle Wilfong) have a Carey leg victory on their card. And Casey Leonard is back behind Slzburgerslzburger who uncorked a wicked 26.1 last quarter in a winning effort a week ago.

Then there’s Captain Rhett who dropped a close head decision to Fox Valley Nemitz in round two of the series and last week looked good getting an overdue triumph.

Anyone of these three pacers could end up as the public’s choice. Looking to pull an mild, or in some cases a major upset, are Decent Lawyer (Jim Lackey), Commondiscourtesy (Matt Kruegert, Spirited Encounter (Bob Smolin), In Your Eye (Ridge Warren) and Sullivan (Kyle Wilfong). 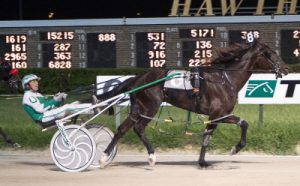 The Jim Horvath Stable’s Captain Rhett, shown here winning with driver Tim Curtin, is one of the major threats tonight in his Carey division when Kyle Husted takes over his lines. (Four Footed Photo)

I had a chat earlier this week with Captain Rhett’s veteran trainer Jim Horvath and asked him to fill me in on the stable’s prize pacer owned by Illinoisans Harvey Grief (Odell) and Robert Verdun (Pontiac). They paid a modest price $2,500 when the horse was a yearling at the 2014 Illini Classic Sale.

“Captain Rhett is what you would call a growing kid,” said the long-time Illinois horseman.. “He’s a big but kind of dumb horse with a lot of speed. You have to get after him to get him going. Then if you smack him on his butt he’ll go faster but he wants to turn around as if to ask: ‘Is that enough?’

“When we brought him out as a 2-year-old he was an absolute monster. When we schooled him he won by 30 with a 27 last quarter. He qualified in 2:00 and the judges were giving horses 5 seconds that day. He made a brief break in his first start and got disqualified from second to sixth and he still paced in 56 and a piece with a 27.2 last quarter.

“His problem began before his first leg of the 2-year-old stake. I was walking in between barns and went into barn two by mistake. I’m in barn three. The water truck went by so I stopped with him. When I took him out of the barn the water truck backed-up and the beeping sound it made scared the heck out of him.

“The horse went right in to the air, came down on me, crushing me like a grape. He was a stud horse at that time. He raced in the stake series and got used about three times and still, got third. Harvey (owner Grief) then decided to have him cut. After they did the horse had no ambition to beat anybody.

“He ended up only missing one check as a 2-year-old but he really wasn’t aggressive. He’s come back this year a much different horse. He’s a great horse to be around and is like a baby in his stall. But I do race him with ear plugs and a min-bit because once he gets behind the gate he gets very aggressive.

“Captain Rhett may have only won one race so far as a 3-year-old but he’s had some big efforts against the top horses in his division. In the first leg of the stake he was four-deep and only got beat about a neck by Royal Big Guy. In the second stake he was eyeball-to-eyeball with Fox Valley Nemitz who is probably at the top of this division right now, and lost a photo.”

Thus far Captain Rhett hasn’t missed a check yet this season and he’s closing in on $20,000 this year going into Saturday’s stake. There will be a driver change on the horse tonight. Tim Curtin had been driving however he chose to steer Ima Skydancer in the Carey. Taking over is Kyle Husted who drove Captain Rhett as a two-year-old in the horse’s first four starts.

Looking Peachy: Kyle Wilfong put Boogie On Down ($6.20) on the front end in last night’s first $16,000 Plum Peachy stake for ICF 3-year-old fillies and the home-bred pacer pulled away to an almost three length victory in her 1:54.1 mile.

Fox Valley Charliz ended up second for the fifth time this season in 10 starts while the first over Princess Sage settled for third.

Boogie On Down is owned by her breeders Lynn Wilfong and trainer Brett Wilfong.

In the fourth race second Plum Peachy spit the lead changed hands four times before The Terry Leonard Stable’s Lady’s Party ($3.20) took over for good in the lane. Aided by an advantageous trip from Casey Leonard she nailed down her sixth season win, this one in 1:54.3.

Fancy Creek Jolene rallied for second place honors, one length behind, while My Kind Of Dance had a game effort to take the Show spot.

Lady’s Party is owned by Mitch Titus and Dennis Wright, both of Charleston, Illinois, and now has banked over $45,000 this year.