Homepage
You are here: Home1 / Mike Paradise2 / This ICF Star Loves Her Job 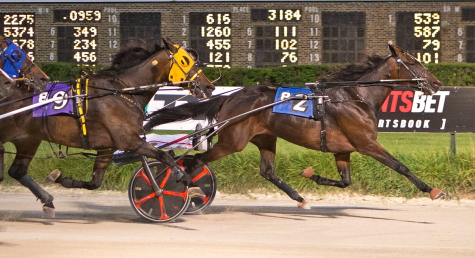 Illinois long-time trotting queen Annas Lucky Star is getting old like the rest of us but her passion to compete hasn’t diminished one bit.

Besides her obvious talent to trot what makes the winner of 43 of 51 career starts with almost $450,000 in purse money banked for her breeder and owner Danny Graham of Salem, Illinois so good?

“She loves to race. Loves to compete,” answered her long-time trainer Nelson Willis.  “When you win, win, win you want to come out on the racetrack, and for a while there they couldn’t beat her.”

Nelson was referring to Annas Lucky Star local dominance in her early years of competition. She went six-for-six as a freshman and proceeded to win eight in a row as a sophomore, sweeping all the major ICF stake events in 2017.

“She’s the kind of horse that doesn’t come around very often. She’s getting old but she’s still out there competing and even now she’s doing well,” added the popular veteran conditioner.

Annas Lucky Star has spent the last three and one-half years often taking on the best trotters in Midwest Opens both here in Illinois and Indiana and still made 28 more visits to a winner’s circle during that time.

Through the years the mare also has made Nelson’s job taking care of her less demanding than most horses.

“She’s a low maintenance mare and is still probably about 80 per cent sound,” added Willis.

Four of the six horses in the featured field shot out from the starting gate but it was the four-year-old Illinois bred Fox Valley Exploit going the fastest, grabbing command before the first turn.

The even-money favorite Rock It Out (Kyle Wilfong) sprinted away from the outside six-slot and Husted was content to let the Donna Holt trained mare take over the lead at the 27.2 first quarter pole.

Rock It Out went to the half in 55.2 and paced the third quarter in 28 flat with Fox Valley Exploit right behind her. In the stretch drive Fox Valley Exploit powered past and went on to a new lifetime mark of 1:51.3, three-quarters of a length better than the fast-closing longshot My Uptowne Girl (Ridge Warren)

Rock It Out held on for third.

Fox Valley Exploit’s victory was her fourth of the Hawthorne meet for co-owners David Brigham of Litchfield and Husted of Altamont, Illinois.

A Long Sunday: Atlee Bender won’t be driving Sunday evening at Hawthorne; however, he’s not taking the day off. Instead, the 29-year-old Indiana native will be at The Red Mile in the afternoon and at Hoosier Park in the evening.

Bender will start his busy day in Lexington guiding a pair of Erv Miller trained two-year-olds in the first leg of the Kentucky Commonwealth Series. Then Atlee will head to Anderson, Indiana in time to handle Erv’s She’sahotmuffler and The Letter in their respective $69,000 Indiana Sire Stakes for two-year-old pacing fillies.