Homepage
You are here: Home1 / Mike Paradise2 / Time to Take Those Baby Steps

We’ll see our first appearance of ICF two-year-old filly pacers tonight when eight of initial crop of freshmen go postward in the first leg of the Incredible Tillie stake series.

A purse of $17,500 is on the line for the young pacing gals as they begin their march to Hawthorne’s Night of Champions on September 19. It’s just the start of the juvenile racing season and we’ll probably see more NOC hopefuls by the time the second Incredible Tillie round comes around on July 10.

Despite what the Hawthorne morning line might indicate, Saturday’s Incredible Tillie is a take-your-pick affair. These
“green” fillies are just taking “baby steps” on their way to becoming race horses so let the learning process begin. 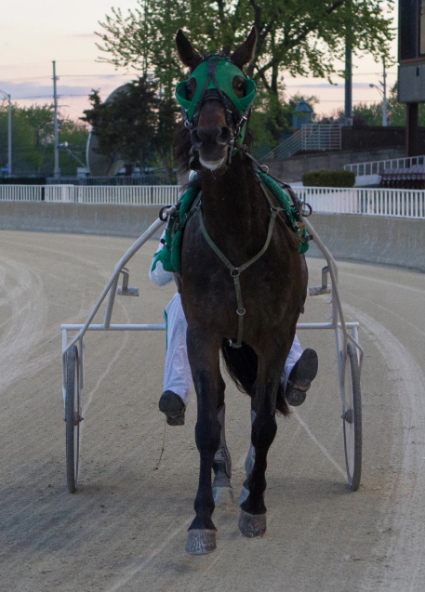 The Kennedy Lindsay ICF trotter Lourhianon goes postward in Saturday night’s second race $10,500 Open Trot, a race the the four-year-old won a week ago but was disqualified and placed second for going inside some pylons in the first turn. (Four Footed Fotos)

Ryans Secret, the younger sister of Roshun Trigg’s Ole Slot Machine (1:58), already has four starts at Springfield resulting in a trio of wins and a second.

Age Of Sage was an $16,000 yearling purchased by trainer Jim Eaton and Casey Leonard chose to drive her over the fillies Connie On The Go (Ridge Warren), the 2-1 morning line favorite, and Princess Mooss (Kyle Wilfong), a Gary Rath trainee who sold for $31,000.

Ryansmajesticrose, a Flacco Family Farms home-bred, is a daughter of Caribe Royale, making her the full sister of Royale Rose (1:50) and Royale Big Guy (1:51.4).

Clearly The Bomb is an Angie Coleman and Rob Rittoff home-bred with two encouraging qualifiers prepping for tonight’s debut.

Freddie Patton Jr’s Kandi’s Fortune benefits from a three Springfield starts. The filly was bought for $9,000 as a yearling.

On the other hand Dandy’s Duchess, trained by his driver Jamaica Patton brought a price of $40,000 at the Illini Classic Sale. She’ll open at surprising 30-1 programmed odds after she made an equipment break a few days competing at Springfield.

Plum Peachy Duels: Before the ninth race Incredible Tillie field goes to the gate we’ll know the outcome of the two $12,500 second round divisions of the Plum Peachy three-year-old pace events. They’ll go as races three and five with prohibitive favorites in each.

Meanwhile the Kyle Husted stable’s Fox Valley Exploit so far has been much the best in the state’s second season filly class. After winning the first leg of the Plum Peachy series, she dominated last week’s Violet Pace, drawing off by more than four lengths on a sloppy rain-soaked track.

Fox Valley Exploit (pp 3) will also be at 4-5 first flash odds (I made her 3-5 in my line) after her two strong recent victories. Style And Spirit (Kyle Wilfong), Sign Her Up (Juan Franco), Castielle (Casey Leonard), Double Parked (Travis Seekman) and June Dale Gram (Cordarius Stewart) will provide the competition.

Take Your Pick: The $10,500 Open Trot returns as tonight’s second race with a six horse field. The Merv Chupp stable’s Pine Dream (Todd Warren) was assigned the outside six-slot by the Hawthorne Race Office. Posts one through five were drawn.

Lourhianon finished first in last week’s Open raced in the rain on a sloppy track however the 77-1 longshot went inside some pylons in the first turn and was disqualified to second with Louzotic awarded her third victory in six season starts for trainer Steve Searle.

It’s a well-balanced field of trotters and you could make a case for any horse in it to come out on top.

On Big Baby Step: The Flacco Family Farms home-bred Ryans Loan Shark proved best in the first round of the Incredible Finale stake series for ICF colts and geldings.

Nicely rated by his driver Cordarius Stewart Ryans Loan Shark ($9.60) went wire-to-wire in his pari-mutuel debut, covering the mile in 2 :0.21 on a sloppy racing surface. Partyatmosaplace (Ridge Warren) put on a late burst to be second, beaten by almost two lengths. Prince Of Style (Kyle Wilfong) was third.

Chalk It Up: The heavy favorites Fox Valley Ren (Casey Leonard) and He’zzz A Wize Sky (Bobby Smolin) were easy winners in their respective second round divisions of the Robert F Carey Memorial stakes.

Another Gem: Fox Valley Gemini (Casey Leonard) used a 26.3 last quarter to capture his third straight Open Pace victory at Hawthorne, this one in 1:53.3. Castle Flight was scratched due to the sloppy race track conditions.

It’s Good and Plenty Time Not all ICF Stakes Worthy of Watching?
Scroll to top