Homepage
You are here: Home1 / Mike Paradise2 / Topville Avatar Getting It Done His Way

It’s a well-known fact the shortest distance between two points is a straight line. However it’s also well-established that the Joel Smith Stable’s top-notch trotter Topville Avatar doesn’t care one iota that it is.

The 4-year-old trotter gets his share of victories by doing it his way and his way is going both forward and to drifting to his right on Hawthorne’s long stretch.

Topville Avatar goes for his third consecutive win in a Hawthorne Open Trot tonight and he’ll be easy to spot in the lane. Just look for the horse racing the closest to the Grandstand in the lane.

A week ago Topville Avatar eked out a neck victory with regular driver Dale Hiteman and a week earlier proved best while giving the Hawthorne patrons grabbing a bite to eat at the outdoor Bar-B-Que a close-up look of the trotter. 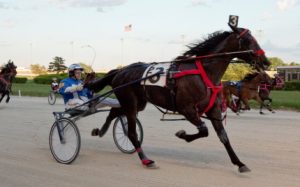 Topville Avatar (Dale Hiteman) is shown in what has become a familiar finish at Hawthorne for the Joel Smith trained trotter. (Four Footed Photo)

Topville Avatar’s stretch drives on the outside of a track are nothing new. In fact, it’s become commonplace for him.

“I tried to explain to him that a ‘straight line is the shortest distant between two points’ but he doesn’t want to listen,” said Joel Smith laughing.

“Nothing I’ve tried has worked. I think now it’s just a habit with him. It’s not caused by any lameness or anything like that. He hits his knees or the bike at times and now even when he doesn’t, he drifts. I’ve got him cleaned-up pretty well and he’s trying to go straighter but he keeps drifting in the lane.”

I told Joel that his trotter does make the dash to the wire in his races very interesting.

“Yes he does,” he replied laughing. “He scares me to death every time he does it. Some of his close finishes probably wouldn’t be so close if he went straight. But he won’t.”

Despite his propensity to race to the far right of the rest of the field in the lane Topville Avatar was a seven-time winner in 2016 and six of those victories came at Hawthorne. The other was in a Hoosier Park Invite.

So far at this meet the trotter has won one start comfortably, one in a tight photo and was a head short in another, all while racing wide in the lane and no doubt making the track photographer standing near the outside fence taking the finish photos a bit nervous.

Only two lengths separated a six horse field in last week’s Open Trot and tonight’s finish could be just as close at the end of the mile, maybe even tighter.

Both Pridecrest and Charles VII were making their Hawthorne debuts a week ago and likely will benefit from a start over the mile track. Each trotter spent most of May competing on Yonker’s half-mile oval.

The Terry Leonard Stable’s Fox Valley Veto steps up to the top-level Open after a game first season win (1:57.3) in a mid-level trot a week ago. The 6-year-old ICF trotter went winless in his first 12 starts this year competing mostly in Ohio and Indiana..

Hawthorne’s morning line lists Fox Valley Veto as the 2-1 favorite while Topville Avatar is the 7-2 fourth choice in the five-horse field. Maybe Topville Avatar’s path down the stretch isn’t the only thing that needs to be straightened out at Hawthorne. 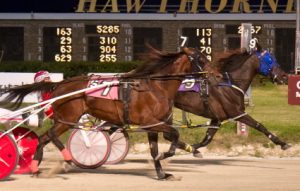 An OK Decision: Yesterday’s story was about the difficult decision Casey Leonard had to make choosing between which of four solid mares to drive in Friday’s $15,000 Open Distaff Pace.

As it turned out Casey choice was the correct one.

OK Heavenly ($4.20) made it 3-for-3 at the Hawthorne meet win a 1:53 victory in the fifth race feature. What was surprising was the way the 5-year-old mare this time did it. OK Heavenly had come from out of it in all of her recent starts but that wasn’t the case Friday night.

Casey left with the Angie Coleman trainee from the assigned outside nine-slot, no doubt looking for early position. However a hole to drop into never materialized. Instead, OK Heavenly had to race parked-out through the 28 first quarter and part of the second before Casey got her to the front mid-way
on the backstretch.

OK Heavenly reached the half-mile pole in 56.2 while pacing a 28 flat second panel. A third quarter breather is what Casey needed with the Sportswriter mare and that’s what he got (28.3).

Coming down the lane the first-over Ryleigh’s Lilly (Bob Smolin) had dead-aim on the 6-5 favorite but weakened in the late going. Fresh Squeezed (Ridge Warren) did come from fifth at the three-quarter pole to be a close second, ending up a neck behind while the Hawthorne newcomer Hipnumberone (Mike Oosting) rallied from further back to take third, beaten one length.

OK Heavenly’s victory was her seventh in 17 season starts and the $7,750 winner’s share of the purse boosted her 2017 earnings to $55,905 for Illinois proprietors Dandy Farms Inc. (Glenview) and Mark Winship (Canton).

Leonard finished with three driving wins on the program while Kyle Wilfong and Mike Oosting both had a pair.

The sixth race 11-1 longshot winner Misspanderosajones (Bob Smolin) was a Mike Paradise Price Shot and paid an even $25.00.