The 1990’s, the last decade of harness racing at Sportsman’s Park, provided us with a trio of ICF pacing fillies that not only captured Super Night championships and plenty of dough for their owners, but also won over the hearts of many Chicago circuit patrons.

Two of the talented fillies, Plum Peachy and Ideal Angel, were developed by the late Illinois horseman Mark Fransen. The other, Panic Attack, was conditioned by Tex Moats. Both trainers are members of our Hall of Fame.

During the four year span of 1990 through 1994, the state-bred trio pretty much dwarfed the competition in their respective Illinois bred divisions and proved to be strong attractions to the popular Cicero, Illinois facility. 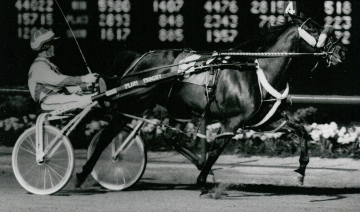 Plum Peachy only raced two seasons, 1990 and 1991, but they were both very productive years for her owners Plum Peachy Stable (driver) Walter Paisley, Henry Babson, Bruce Johnson and Dennis Kyros.

The daughter of Ideal Society, out of the Nanesmond mare Delightful Angel, had a dazzling two-season record of 15 victories on 18 starts with $356,082 in purse earnings. Plum Peachy provided back-to-back Super Night championships, winning both the $365,843 Filly Orange & Blue freshman stake in 1990 and the $210,000 Grandma Ann 3-year-old final, a year later.

Plum Peachy was named the 1990 Illinois Harness Horse of the Year and three times broke the Sportsman’s Park track record that season for a juvenile filly pacer, the last in 1:56.2.

Plum Peachy started a new career as a broodmare in 1993 and in 1998 produced a future millionaire when she delivered Peruvian Hanover (1:49.4, $1.8 million) 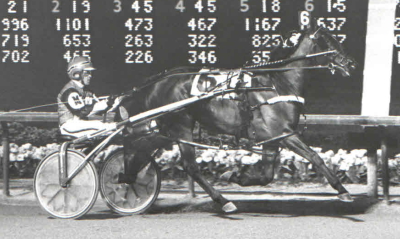 In 1991 the Tex Moats Sable unveiled the Masquerade filly Panic Attack, who quickly became the dominant ICF filly pacer that year, winning 10 of her 11 first season outings. Panic Attack left no doubt she was the best on Super Night with a convincing 1:56.3 victory in the $342.000 Filly Orange & Blue showdown. She put $230.526 on her initial card for owners Don Stevens and Norman Levin.

Ideal Angel then came along to provide the last part of the dominant ICF filly triad. Another Mark Fransen trainee also sired by Ideal Society she had a solid freshman campaign earning over $67,000 and then blossomed into a terror a year later in the Illinois bred distaff pacing ranks. 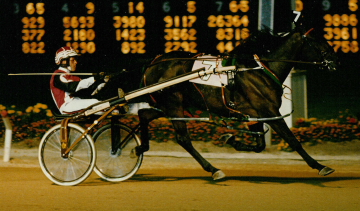 In her nine trips to the gate in 1993, Ideal Angel’s only loss was a second place finish at Springfield. In her other eight starts at either Balmoral or Sportsman’s she made a winner’s circle stop with Dave Magee or Ronnie Marsh. The daughter of Raven Hanover mare Grade’s Ravina hauled in over $164,000 for owners Michael Dockendorf, David Andalman and Steven Zatkin.

Ideal Angel powered her way to an almost eight length victory in the $182,000 Grandma Ann Championship with Marsh and in 1994 as a four-year-old blew away the opposition again on Super Night in the Ann Vonian, drawing off by nine lengths with Dave Magee in her bike.